President visits Santiago de Compostela while on trip to Galicia 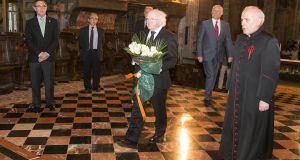 President Michael D Higgins has laid a floral tribute in the cathedral in Santiago de Compostela in memory of those killed in the train crash near the Spanish city.

In a visit to the region of Galicia, Mr Higgins attended the pilgrimage site and offered his personal condolences to local dignitaries.

Seventy-nine people were killed when the train derailed at speeds of 111mph in Santiago de Compostela in July.

President Higgins met the president of the Xunta de Galicia, the autonomous government in the region, Alberto Nunez Feijoo, in Porto do Son and expressed sympathies over the rail disaster.

The President later joined Mr Curras, the Archbishop and Ireland’s ambassador to Spain Justin Harman for the floral tribute in the cathedral — the final destination for thousands of pilgrims on the Camino of St James.