Higgins declares fitness for another seven years at the Áras 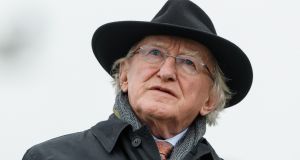 President Michael D Higgins declined to say if he would be willing to publish his medical records. Photograph: James Crombie/Inpho

President Michael D Higgins has insisted his “health is excellent” as his potential rivals said they would be open to publishing their medical records during the presidential election campaign.

Independent Senator Pádraig Ó Céidigh has said he wants the medical records of all who will stand in the election released, a move businessman Gavin Duffy has said he would also be open to.

Mr Ó Céidigh (61), the Aer Arann founder, has yet to decide if he will stand against Mr Higgins (77), who is seeking a second, seven-year term in Áras an Uachtaráin. Mr Duffy (58) is actively seeking a nomination from county councils.

In order to get into the presidential race, a candidate needs 20 TDs or senators to sign their nomination papers or is required to secure the backing of four county councils.

Mr Higgins on Sunday opened the 50th annual Birr Vintage Week and Arts Festival in Co Offaly. While he declined to say if he would be willing to publish his own medical records, the president insisted he was in good health.

“My health is excellent, in fact everyone knows about it,” he said. “Seven years ago when I was contesting the election there was great attention paid to the fact that I had damaged my knee at Cruinniú na mBád.

“After the inauguration on the 11th of November, the first Christmas, I got it repaired and by the middle of January I wasn’t even using a stick. There is a 110-degree bend in my knee now and the rest of my health as well is excellent.

“No, no, he needn’t worry at all and I hope his own health is excellent,” he said of Mr Ó Céidigh’s request.

“I don’t want to go into that kind of . . . there will be plenty of time for issues in the campaign when it starts but really, I don’t think it is where it is.

“The campaign hasn’t started as far as I am concerned yet and when it does start what we really should be doing is concentrating on what the different candidates are offering the Irish people,” said Mr Higgins.

“I never said that I was against having an election, quite the opposite indeed. I am very happy that we will have had an opportunity for letting the people make their choice and that is what is really important. The other stuff is really not of great importance.”

Mr Duffy said he would be open to publishing his medical records if all candidates did so.

Áras an Uachtaráin and the presidency is not covered by freedom of information (FOI) legislation, but Mr Ó Céidigh said such spending details should be published in the interests of transparency.

Mr Duffy said that while he favoured opening up the post to FOI – aside from correspondence to and from the president – he doesn’t believe Mr Higgins should “retrospectively” publish all such details.

If elected, however, Mr Duffy said he would publish his own spending as a matter of course.

In an interview with the Sunday Business Post, Mr Duffy confirmed he had helped businessman Denis O’Brien prepare for media interviews following the publication of the Moriarty Tribunal report.

The tribunal concluded it was “beyond doubt” that Michel Lowry had, as minister for communications, given “substantive information to Denis O’Brien of significant value and assistance to him in securing” a mobile telephone licence in the mid-1990s. He declined to provide further details.

Mr Duffy says he fully accepts the findings of the tribunal. Mr O’Brien has rejected its findings.

Mr Duffy also said he briefly met the former chairman of Anglo Irish Bank, Seán FitzPatrick, but decided he could do nothing to help Mr FitzPatrick.