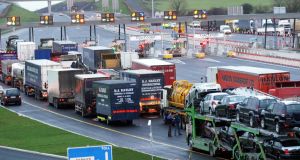 The haulage industry will seek State and EU financial support if a hard Brexit leads to delays and damages business for lorry drivers and transport companies, the industry’s representatives have said.

There are more than 2,300 haulage companies in Ireland running 13,000 trucks internationally, though the sector is dominated by small operators with an average fleet of five trucks.

This could jeopardise the business models of smaller hauliers who offer “groupage” service where they collect a mix of goods from different customers to create an economic full-load for transportation.

Brexit also poses major challenges to Irish lorry drivers and logistics companies that run a type of courier service in the UK to maximise loads with drop-offs and pick-ups en route to and from mainland Europe.

The Irish Road Haulage Association and the Freight Transport Association Ireland (FTAI) have said the industry would follow the farming sector and seek State and EU financial aid if Irish hauliers face losses due to Brexit.

“If the goods don’t move, we don’t work,” said Verona Murphy, president of the IRHA. “We will be equally affected and will expect to be treated as equals in relation to any type of compensation or funding.”

She said the industry would raise the issue with Minister for Business Heather Humphreys when representatives meet the Minister this week to express their concerns about the potential effect on the sector.

Aidan Flynn, general manager of FTAI, said that haulage was a “high-risk sector” irrespective of what form Brexit would take but that the risk would be “exacerbated” in the event of a no-deal Brexit.

“There is no doubt supports such as State aid intervention will be sought to combat the negative impact Brexit will have on the haulage sector,” he said.

The Government has opened discussions with Brussels over possible State aid support in the event of a hard Brexit, though formal proposals cannot be made until the United Kingdom has actually exited the European Union.

Revenue chairman Niall Cody has warned that Britain’s departure from the EU would have a “significant impact” on “courier” services offering collections and drop-offs in the UK.

Mr Cody told an Oireachtas committee that the impact on some hauliers would be “more extreme” than on others and that part of the freight industry’s model “will not be sustainable”.

Revenue has advised hauliers that, after Brexit, if they are importing more than one consignment on lorries, customs declaration forms must be submitted in advance by the declarant for each consignment to ensure fast-track passage through the “green” no-physical-check channel on arrival into the country.