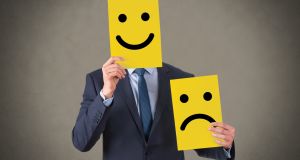 The figures for Ireland showed a marked increase in happiness by the time people entered their late-50s, which continued to increase into their 60s and 70s.

People begin to report being happier with life from the age of 50 onwards, according to new research from a leading British-American academic.

Drawing on statistics from 132 countries including Ireland, research conducted by economist David G Blanchflower also revealed evidence of a “mid-life crisis” hitting people when they enter their mid-40s.

Published on Monday, the research shows reported happiness and wellbeing steadily declined from 18 years of age to a low point at 47, before rising back up as people enter their 50s and continuing to increase into their 60s and 70s.

The statistics show “there is a mid-life crisis, and happiness is at its lowest in the mid-40s”, Mr Blanchflower told The Irish Times.

This low point may be tied to people’s disappointment with their station in life compared to past ambitions as to what they might achieve, he said.

“You thought you were going to be the president of Ireland, you realise that’s not going to happen. You didn’t play in the NFL or for Manchester United,” Mr Blanchflower said. People began to report being happier when they became more “realistic” about what they had achieved in life, he said.

The study was produced for the National Bureau of Economic Research in Massachusetts, USA.

Middle-aged people were in many cases the “hardest-hit age group” during the financial crash at the start of the last decade, which may also help to explain the findings, Mr Blanchflower said.

The figures for Ireland showed a marked increase in happiness by the time people entered their late-50s, which continued to increase into their 60s and 70s.

Mr Blanchflower said the study clearly proved the existence of a mid-life crisis was more than a “myth”. There was no major difference in the levels of happiness between those in their mid-40s who were employed and those out of work, he said.