Man in his 20 arrested in Brownstown carrying concealed weapon 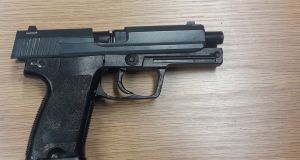 A man has been arrested after being found carrying a concealed weapon in Co Kildare.

The man in his 20s was stopped by gardaí in Brownstown on Tuesday as part of Operation Thor. A handgun was found on his person.

The man is being detained at Kildare Garda station under the provisions of Section 4 of the Criminal Justice Act 1984,

Operation Thor was set up in late 2015 to target gangs after a number of violent burglaries on isolated homes and businesses in which high-powered vehicles were used to escape along the State’s motorways.

The latest official Garda figures, quoted by Minister for Justice Charlie Flanagan when questioned about the fight against rural crime, state that 10,024 arrests were made under the operation between November 2nd, 2015, and May 7th of this year. This represents an average of eight arrests every day over the past 3½ years – or one arrest every three hours.

There have also been 11,554 charges brought under the operation to date, for a range of offences including burglary, handling stolen property, possession of firearms and drugs offences, according to the Garda.

The Garda figures further state that there have been 200,939 checkpoints under the operation since it started – on average about 158 every day.