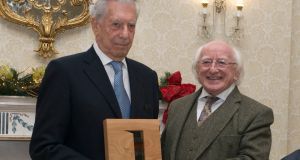 British solicitor and human rights activist Gareth Peirce is among 10 people who have received the Presidential Distinguished Service Award.

Ms Peirce and the others were honoured at a reception hosted by President Michael D Higgins in Áras an Uachtaráin and attended by Taoiseach Enda Kenny, Minister for Foreign Affairs Charlie Flanagan and Minister for the Diaspora Jimmy Deenihan.

Ms Peirce came to prominence with her successful defence of the Guildford Four, who were acquitted and released from jail in 1989. They had served 14 years in prison for the 1974 Guildford pub bombings.

She gave the eulogy at Gerard Conlon’s funeral last year, saying the Guildford Four release “set something in motion that forced the rest of us, the rest of the world, Britain, to hold a mirror up to ourselves and see precisely who we were and what we had done”.

The Presidential Distinguished Service Award for the Irish Abroad was set up four years ago to honour those who work with the Irish community overseas. Ms Peirce was honoured in the peace, reconciliation and development category along with Tom Moran, the Irish-American chairman of Concern Worldwide.

Fr Brendan McBride of the Irish Immigration and Pastoral Center in San Francisco, who was prominent in organising support for the victims of the Berkeley balcony crash this year, received an award in the Irish community support category, along with the Irish-American historian Dr Maureen Murphy.

The Peruvian Nobel Prize winning novelist Mario Vargas Llosa, who has written about Roger Casement in his novel The Dream of The Celt, and the actor Gabriel Byrne were honoured from the world of the arts.

The former Unilever chairman Niall Fitzgerald, the educationalist and management guru Charles Handy and the Japanese-based priest Fr Donal Doyle were honoured in the business and education category.

Sister Dr Miriam Duggan (Kenya), an obstetrician and Franciscan sister based in Africa, was recognised for her charitable works.

The President told the gathering that the “collective achievements of this evening’s award recipients is a cause for great pride for the people of this island and contributes to a sense of nationhood that reverberates far beyond this room”.

1 Dublin gangland figures involved in Drogheda feud that killed 17-year-old
2 Mary Lou has to call for the smelling salts as SF councillor deals a knock-out blow
3 Who was murdered teenager Keane Mulready-Woods?
4 Murdered and mutilated: Keane Mulready-Woods and the teenagers of gangland
5 Teenage boys and organised crime gangs: A complicated dynamic
Real news has value SUBSCRIBE