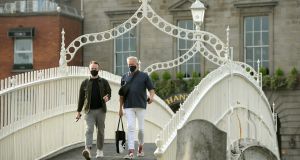 Paschal Donohoe said anyone from Dublin considering a staycation elsewhere in the country should reschedule. Photograph: Dara Mac Donaill

The Government has decided to hold two special meetings on Friday triggering the likelihood that Dublin will be elevated to Level 3 of the Covid-19 alert plan by the weekend.

According to reliable sources, the Cabinet sub-committee on Covid-19, chaired by Taoiseach Micheál Martin will meet on Friday to discuss the latest report from the National Public Health Emergency Team (NPHET) on the situation, nationally but particularly in the capital.

If the NPHET conclusions are negative, a full incorporeal Cabinet meeting will be held on Friday afternoon to place Dublin on level three of the five-level plan.

“If the numbers continue as they have been, this is only going one way,” said a Government source.

NPHET will hold its weekly meeting on Thursday to discuss the latest data and evidence of the prevalence of the virus in Ireland, and suggest measures to stem or curb its spread.

If it finds that infections in Dublin have not stabilised and further action is required, preparations will be made for an incorporeal Cabinet meeting on Friday to give effect to its findings.

That could mean that Dublin and its population of 1.4 million would be subject to tighter regulations that the other 25 counties. They include a ban on social or family gatherings indoors or oudoors, additional restrictions on indoor dining, as well as people being told not to travel outside the county. No matches or events will be allowed and no spectators allowed at any games (such as elite GAA and soccer games) that do take place.

As happened with Dublin this week, a decision may be taken to modify some of the more severe restrictions.

It is not known if the new oversight group, chaired by Government secretary general Martin Fraser, will meet to discuss NPHET’s findings as laid out in the new medium-term plan. It is understood that it may take several weeks before its membership and terms are concluded.

Earlier Minister for Finance Paschal Donohoe said there is a “strong” and “very real” possibility that Dublin will be moved to level three in the Government’s plans for coping with the Covid-19 pandemic.

Of the 254 more cases confirmed on Wednesday by the National Public Health Emergency Team (NPHET), 136 are in Dublin.

“I am more concerned than at any point in time since late April,” chair of NPHET’s epidemiological modelling advisory group, Prof Philip Nolan told a press briefing on Wednesday.

Latest figures show that incidence of the disease in the capital is running at about twice the national average.

The figures prompted Dr Ronan Glynn, the acting chief medical officer, to warn the Government that the capital had become a “disease reservoir” which could put the whole State at risk.

Dublin remains at Level 2, along with the rest of the State, on the Government’s five point Covid-19 scale but extra restrictions have been announced and the expectation is that the county could be moved to Level 3 next week.

Mr Donohoe said people living in Dublin who are considering going on holidays elsewhere in the State should reschedule and that those from the county planning to have or attend weddings outside the capital should reconsider this.

His colleague, Minister for Public Expenditure Michael McGrath, said there has not been an instruction for the public not to visit Dublin, but that people should avoid doing so unless it is necessary.

Both men defended the Government’s handling of the pandemic after it came in for criticism for not communicating its medium-term Living with Covid-19 strategy clearly after it was published on Tuesday.

Level 2 limits the number of visitors allowed in a home to six people from two or three other households, up to 15 people can meet outdoors from up to three households, outdoor sports training is permitted for up to 15 people (except for professional teams) and up to 100 people can watch sports events outdoors and 50 people indoors.

Level 3 limits visitors to a home or garden to people from one other household, travel is restricted to your county or region apart from for work, education or essential reasons, attendances at weddings is reduced from 50 to 25, no indoor gatherings (including meetings, theatres, cinemas, arts venues) are permitted, only individual indoor sports training is permitted and visits to long-term residential care facilities, including nursing homes, are suspended.

Mr Donohoe told RTÉ’s Morning Ireland that until case numbers in Dublin start to reduce the advice remained that people should not travel outside the city or the county.

He said that at all times the Government would be guided by the advice of the medical experts and the National Public Health Emergency Team would provide further advice to the Government on Thursday, after which there was “a very real possibility” that Dublin would move to level three. He added that all decisions will be taken with the aim of saving lives.

Mr McGrath told RTÉ’s Today with Claire Byrne show that the hospitality industry in Dublin remained open, the city remained open for business, but the Government was asking people to be cautious and to use their judgement.

He said the Cabinet would not shirk from making public health decisions that could prove unpopular and that there was “a distinct possibility” that Dublin would move to Level 3 by this weekend.

“This is difficult, none of this is easy, we’re all weary,” he said, adding that the public should “bear with us” as “we all know the consequences if we don’t” take action where needed.

Mr McGrath said the decision the Government made on Dublin, to include it at Level 2 but with extra restrictions, mirrored exactly what NPHET had recommended.

“This is messy, we’re into nuance and detail here. But I don’t accept the hyperbole and exaggeration from certain Opposition voices in the past 24 hours (about how the pandemic is being handled).”

When asked about a case raised by the Labour’s Dublin Fingal TD Duncan Smith about a couple from his constituency who were due to have their wedding outside Dublin shortly, Mr Donohoe said he would urge them to reconsider and not to leave Dublin. The Minister also said anyone from Dublin considering a staycation elsewhere in the country should reschedule. He said he hoped that accommodation providers would be flexible about deposits.

He defended the decision by the Ceann Comhairle to halt Dáil proceedings on Tuesday when Minister for Health Stephen Donnelly went for a Covid-19 test.

The Dáil was a workplace and was subject to the same guidelines as the public, he said. It had been “entirely understandable” what had happened, he said but admitted it might have been more appropriate to have had a temporary adjournment.

Mr Smith said the Government should have placed Dublin clearly on either Level 2 or 3 on Tuesday.

1 Man unidentified in psychiatric hospital for 30 years may have DNA taken
2 Miriam Lord: Another dog’s dinner as D’Arcy jumps on the gravy train
3 ‘Insane’ gathering of hundreds of students in Galway condemned
4 Speed and distance of Covid-19 droplets tracked by Mater researchers
5 Covid-19: One death and 363 further cases confirmed in State
Real news has value SUBSCRIBE