Government insists Roma not being ‘singled out’ 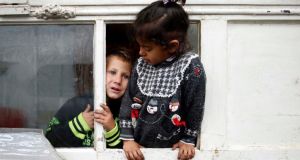 Two Roma children lean out through the window of a caravan at an encampment of Roma families in Triel-sur-Seine, near Paris. Photograph: Benoit Tessier/Reuters 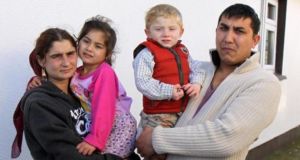 Loredana and Iancu, parents of Iancu Jr (2) and his sister. Two gardai called to their home on Tuesday and asked the boy’s father to come with them.

Taoiseach Enda Kenny and Minister for Justice Alan Shatter have said the removal of two Roma children from their homes by State authorities should not be linked to race or result in any group being “singled out” for unwarranted attention.

“This should not be seen to be about any group or any minority, this is about children, and there’s always a balance to be struck if there are genuine fears about the health, welfare and safety of children,” Mr Kenny said today.

Mr Kenny said the HSE had been instructed to provide a report on the cases to the Minister for Justice and Minister for Children, which, he said, would be sent on to the Children’s Ombudsman.

“It’s only right and proper that we get a detailed report on what exactly happened here and the balance that was struck between the safety, welfare and health of the children and the law as it stands,” he said.

“This is a case of the safety and centrality of children as distinct from any categorisation of a sector or a minority grouping.”

Mr Shatter said he is anxious to ensure that no group or minority community is “singled out for unwarranted attention” or suspicion following this week’s events.

The matter has attracted criticism from Traveller support group Pavee Point which expressed concern yesterday about racial profiling and the danger of “witch hunts” and racism against vulnerable members of the Roma community.

The two incidents came after a high-profile case in Greece in which a young girl living with a couple who claimed to be her biological parents was found not to be theirs.

Mr Shatter said he expects gardaí and the HSE to report back to his office and to the office of Minister for Children Frances Fitzgerald within two weeks.

He said it is “absolutely appropriate” that the finalised HSE and Garda reports are then submitted to Children’s Ombudsman Emily Logan for independent review.

A two-year-old boy was returned to his family in the midlands yesterday after spending a night in HSE care while in west Dublin, a seven-year-old girl was reunited with her family last night after DNA tests proved the couple who claimed to be her parents were telling the truth.

Speaking this morning, Mr Shatter said it was “important”lessons are learned from both cases. He said he had “no doubt” that gardaí acted “in good faith” in both cases.

“Fortunately it turned out that the concerns that arose in each of these cases were unfounded,” Mr Shatter told RTÉ’s Morning Ireland. He was “very anxious” to ensure that any lessons that need to be learned “are learned” and that procedural changes are implemented if required.

Mr Shatter did not rule out the possibility that a similar case in Greece where a blonde child was taken from a Roma couple may have had some bearing on decisions taken by authorities here.

“We never stop learning in these areas. And obviously we’ve had events in this instance where two children from Roma families with an international backdrop of a case that has been under the spotlight for some time may have had, possibly, some undue influence in the decisions that were made,” he said.

Commenting on the danger of an adverse reaction against the Roma community on foot of widespread publicity, Mr Shatter said he was “anxious” to ensure that does not happen.

“I am ... anxious to ensure that there is no question of any group or minority community being singled out for unwarranted attention or indeed suspicion in relation to child protection issues. I don’t believe that was the intention here.”

Mr Shatter accepted the experience was traumatic for the families involved.

“I am sure the action taken was well-intended. It was obviously traumatic for the families, it was traumatic for the children and we must do what we can to ensure that if there are any changes required in the approach taken that they are put in place,” he said.

Expressing concern at how the media reported the event, Mr Shatter said it was regrettable that details of the cases “found their way into the public domain and brought additional pressure on to the parents.

“The results established that the concerns the gardaí and the HSE may have had were unfounded,” he said. “I don’t know why so much detail found its way into the public domain.”

Mr Shatter said this was also a matter to be considered by the Children’s Ombudsman.