Government expects economy to grow by 6% this year 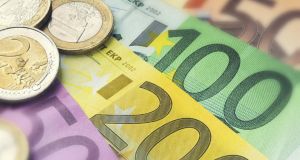 Minister for Finance Michael Noonan has warned there will be no “spending spree” in the budget. Photograph: Gareth Chaney Collins.

The Government now expects the economy to grow by about 6 per cent this year, far more than originally forecast, after new data pointed to another acceleration in recovery.

The latest quarterly national accounts, which will underpin key budgetary calculations, show the economy grew by nearly 2 per cent in the three months to June.

The Central Statistics Office also revised up growth for the first quarter to 2.1 per cent, putting the increase in gross domestic product (GDP) for the year to June at 6.7 per cent, more than twice the level achieved by Spain, the next strongest euro-zone performer.

The better-than-expected numbers, combined with bumper tax receipts for the 10 months to August, have piled pressure on the Government to loosen its purse strings ahead of next month’s budget.

However, Minister for Finance Michael Noonan warned yesterday there would be no “spending spree” in the budget just because it is an election year, insisting the Government must act with a steady hand to avoid a slip back towards “crisis mode”.

He said his department was likely to upgrade its 2015 GDP forecast for the economy to “about 6 per cent” from its current forecast of 4 per cent.

“Unlike in the past when activity was excessively concentrated in the construction sector we are now seeing both domestic-facing and exporting sectors performing strongly,” he said.

The latest set of accounts show both GDP and gross national product (GNP), which strips out the multinational element, grew by 1.9 per cent in the second quarter.

Personal consumption, the largest component of domestic demand, continues to underscore Ireland’s recovery narrative, rising 0.4 per cent on a quarterly basis and 2.8 per cent year on year. Strong retail sales data in July suggest a sharper pick-up lies ahead.

A surge in R&D spending is also continuing to drive investment by firms, which rose by 19.2 per cent in the quarter.

The balance of payments current account, which reflects Ireland’s trading position with the rest of the world, recorded a surplus of €2.7 billion for the quarter, up from €1.9 billion in the first quarter.

However, several commentators claimed Ireland’s export volumes were being artificially inflated by “contract manufacturing” in the pharma sector, whereby Irish-based firms engage companies abroad to manufacture products on their behalf.

In volume terms, there was increase of 4.2 per cent in the industry sector, including building and construction where a 2.4 per cent increase was recorded. The distribution, transport, software and communications sector increased by 2.9 per cent while agriculture, forestry and fishing grew by 2.8 per cent.

Ireland’s improving fiscal position means its debt-to- GDP ratio is likely to fall below 100 per cent by the end of this year rather than 2016 as originally forecast.

The State’s debt peaked at 125 per cent of GDP in 2013 as it exited the three-year bailout programme.