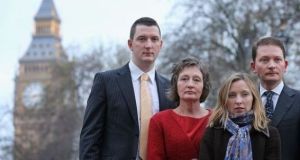 The Government still believes there should be an independent inquiry into the 1989 murder of solicitor Pat Finucane, despite the family losing a British supreme court challenge over the decision not to hold an inquiry.

Taoiseach Leo Varadkar noted the unanimous decision that an investigation compliant with Article 2 of the European Convention on Human Rights has not been held into the killing, and said the Government would be examining the judgement closely.

“The Government’s position is that an independent public inquiry into the murder of Pat Finucane should be established, in line with the political commitments made by the British and Irish Governments at Weston Park in 2001. The Government has made this position consistently clear to the British Government, and will continue to do so,” Mr Varadkar said.

“I have met with the Finucane family in recent months, as has the Tánaiste, to confirm the Government’s ongoing support for their search for truth and justice. The Department of Foreign Affairs and Trade is in ongoing contact with the family at this time.”

Earlier in London, the family won a declaration that an effective investigation into Mr Finucane’s killing has not been carried out.

The British court ruled that Mr Finucane’s widow, Geraldine, had been given “an unequivocal undertaking to hold a public inquiry into Mr Finucane’s death”, but that the “change of heart on the part of the government” was made in good faith.

Mr Finucane was shot dead in front of his family in February 1989 by loyalists in an attack found to have involved collusion with the state. The 39-year-old was shot 14 times while having Sunday lunch at home with his family.

John Finucane, a son of Mr Finucane, described the outcome as a “great result today for our family,” when he spoke to RTÉ’s Today with Sean O’Rourke show.

“It was very emotional for all of us. It is an enormous relief for my mother, it has given all of us a boost.”

He said that the British supreme court’s decision has “blown out of the water” the results of a previous review of the case. The British government has “run out of road” and will “finally have to do the right thing”, he said.

John Finucane denied that Brexit would have an impact on the obligation of the British government under Article Two to investigate all the facts of his father’s murder.

He added that public support “spurs us on.”

The decision was not just about the murder of his father, he said. There are many other families which also deserved full accountability.

“This case goes to the heart of the British establishment and the deaths of so many people. The question now is, will Downing Street do the right thing?”

However, he did caution that the longer the delay the greater the risk to the credibility of any inquiry as witnesses may have passed away.

Previous investigations and reports into his father’s death did not meet their obligations, he said.

British prime minister Theresa May’s official spokesman said the British government would consider the court’s judgment “in detail” before determining what kind of investigation, if any, to order into the murder of Pat Finucane.

“We recognise the suffering of Mrs Finucane caused by the appalling murder of her husband. In 2012 the then prime minister apologised for the collusion that took place, which should never have happened. In relation to the supreme court we are considering that judgment,” the spokesman said.

“We’ll consider it in detail before determining our next step but in relation to the judgment I think it does not direct the holding of a public inquiry and it makes it clear that it is for the state to decide what sort of investigation if indeed any is now feasible is required in order to meet the investigative requirements under Article 2 [of the European Convention on Human Rights].”

Tánaiste and Minister for Foreign Affairs Simon Coveney told the Dáil on Wednesday that, “regardless of this legal decision”, the Government’s view had not changed.

Responding to the judgment, Mr Coveney said: “There was an agreement that there would be a full public inquiry established and that agreement has not been followed thorough on, and we believe it should be and that position isn’t going to change.”

Mr Coveney said it was still the Government’s view that “an independent inquiry be established into the Finucane case in line with the commitments by the British and Irish governments at Weston Park in 2001. That is still our position and it is not going to change regardless of this legal decision.”

He said the Government would have to study the judgment “before we make an informed commentary on the implications of that decision”.

However, he said that “on the substantive issue, the Irish Government’s position remains very consistent and very firm”.

Mrs Finucane had claimed the British government unlawfully “reneged” on a promise to hold a public inquiry into the killing — one of the most notorious of the Troubles — when former British prime minister David Cameron instead ordered an independent review.

Giving the judgment of the court on Wednesday, Lord Kerr found that the decision not to hold a public inquiry into the murder was a matter for the British government’s “political judgment”.

But the court also ruled that the de Silva review was not compliant with Article 2 of the European Convention on Human Rights, which required the investigation to be provided with “the means where, if they can be, suspects are identified and, if possible, brought to account”.

Lord Kerr declared that there has not been an effective investigation into Mr Finucane’s murder, but added: “It does not follow that a public inquiry of the type which [MRS FINUCANE)]seeks must be ordered.

“It is for the state to decide... what form of investigation, if indeed any is now feasible, is required in order to meet that requirement.”

At a hearing in June, Barry Macdonald QC said Mr Finucane was a victim of “a policy of systemic extra-judicial execution that was as cynical and sinister as can be imagined”.

He told the British supreme court that “loyalist terrorist organisations were infiltrated, resourced and manipulated in order to murder individuals identified by the army and the police as suitable for assassination”.

Mr Macdonald said this policy was “widened” to include lawyers such as Mr Finucane, who represented a number of high-profile republicans.

He concluded: “The police, the army and the security service, MI5, are all implicated in a policy that entailed identifying lawyers with their clients and legitimising them as targets for assassination.”

He added: “In other words, state-sponsored terrorism.”- Additional reporting PA