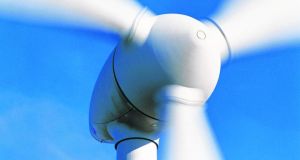 
The Government has accepted a Sinn Féin Bill to set the distance of wind turbines from houses at 10 times the height of a turbine.

He said “we clearly need planning regulations that are fit for purpose and are mandatory rather than voluntary or suggestions”.

One of the key proposals in the Bill was “that there be a minimum setback distance of 120 times the height of the turbines”.

Mr Stanley said the proposals for industrial-scale wind farms had generated massive debate and a lot of opposition in the midlands. “The proposed turbines were of a height and size never seen before in this country.”


Frightened
He said people were frightened by the prospect of huge turbines being erected in their hundreds and the impact that would have on the landscape and potentially on the quality of people’s lives.

Minister of State Jan O’Sullivan told the Dáil during the Private Members’ debate that “while there are certain aspects of this Bill which could place overly onerous restrictions on the wind industry, the Government does not intend to oppose this Bill at second-stage reading”.

She said it was important to have an honest discussion on these issues .