Give Me a Crash Course In . . . Dáil holidays

Fine Gael has floated the idea of a 12-week break this summer, citing restoration work at Leinster House. But that’s not quite the full story 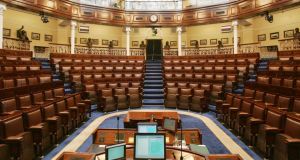 What’s this about the Dáil taking a three-month holiday? Yes, after the election campaign early in the year, then weeks of talks about forming a government, followed by a few days of largely meaningless statements in the Dáil while waiting for Enda Kenny to be elected Taoiseach, some TDs this week eyed up a 12-week break from the chamber.

Twelve weeks? How will they get away with that? Well, they haven’t quite got away with it. The idea of the Dáil being off for 12 weeks was floated at a meeting of the Fine Gael parliamentary party this week, when TDs were told it could rise on July 7th and return in late September. In the bygone era of majority governments, the administration of the day would decide how long the summer holidays would be, and the Opposition would object half-heartedly. Now, with the Fine Gael-led minority Government relying on the acquiescence of Fianna Fáil and others, it cannot decide on its own when the Dáil will rise. Once July 7th was floated, Micheál Martin and others voiced objections, so the Government said it would refer the issue to the new Oireachtas-business committee. The final decision will be made by the Dáil, with sources suggesting a slightly later date of July 14th as the beginning of the holidays. It is not yet clear, however, when the Dáil will return after the summer. Of course, TDs say they will be attending to committee and constituency work while the Dáil is in recess.

Isn’t there something about Leinster House being restored? The renovation of Leinster House was cited at the Fine Gael parliamentary-party meeting as a reason for the longer-than-usual summer recess. In the past few years the Dáil rose in late July and returned in early or mid-September. It is true that the Georgian core of the Leinster House complex, which dates from the 18th century, is about to undergo its most significant restoration ever, with scaffolding and severe restrictions set, effectively, to close the building for a year. The Seanad will have to move to another premises, but the Dáil chamber, which is outside the Georgian core, will be largely unaffected. It will see its sound and voting systems upgraded over the summer. Ceann Comhairle Seán Ó Fearghaíl has said the restoration works will not require the Dáil to rise as early as July 7th.

Didn’t the Dáil always rise for such lengthy periods?In the days of the Celtic Tiger – and even before – the Dáil often rose early in July and returned in the dying days of September. That changed as public tolerance waned with the onset of the economic crisis. Sittings that extended well into July became common, and the Dáil returned earlier in September. The return was also usually preceded by parliamentary-party “think-ins”, when TDs and senators got together in a hotel, ostensibly to discuss priorities for the term ahead.

When will a final decision about the length of the recess be made? It is expected that the new Oireachtas-business committee will meet next week, so we should get an idea in the coming days.