German president condemns his country’s invasion of Belgium in 1914

Joachim Gauck said his country’s invasion had been ‘completely unjustifiable’ 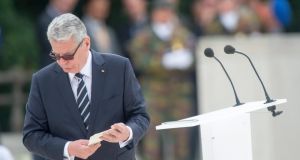 German president Joachim Gauck leaves the podium after a speech during a ceremony of remembrance for the 100th anniversary of the outbreak of the First World War, at the Allies’ Memorial, in Cointe, near Liege, Belgium today. Photograph: Maurizio Gambarini/EPA

German president Joachim Gauck delivered a forceful speech today on the actions of his own country in invading Belgium on August 4th, 1914 .

Mr Gauck spoke at the official Belgian commemoration in Liège to mark the 100th anniversary of the outbreak of the first World War where President Michael D Higgins and the assembled heads of state and dignitaries have gathered.

He also condemned the behaviour of German troops in Belgium, who shot innocent civilians and burned the world-famous Catholic library at Leuven to the ground.

“On the very first day it became apparent that standards of civilisation can be rendered null and void,” he said.

The conduct of the German troops had spread “fear, shock and rage far and wide”.

He also excoriated the intellectuals and artists in his country for justifying the war shortly after it started.

“What had happened to the civilisation called Europe?” he asked.

Among those who attended the commemoration in Liége this morning, which was hosted by the King Philippe and Queen Mathilde of Belgium, were the presidents of Italy, Ireland, Serbia, Romania and the outgoing European Commission president, Jose Manuel Barroso. Felipe VI, King of Spain, whose country was neutral in the war, also attended.

French president François Hollande said Europe must face up to its responsibilities in trouble spots around the world.

Mr Hollande said: “I have talked about the neutrality of Belgium, but today the question is, how can we remain neutral when one people not far from Europe is fighting for its rights and its territorial integrity?

“How can we remain neutral when we see a friendly county like Lebanon seeing its territorial integrity being threatened?

“How can we remain neutral when, in Gaza, a hard murderous conflict is going on for one month?

The Duke of Cambridge, on behalf of Queen Elizabeth II, said events in Ukraine showed that “ instability continues to stalk our continent.”

He said the presence of president Gauck and the Austrian president Heinz Fischer at the service showed the “power of reconciliation”.

He continued: “Not only is war between us unthinkable, but former adversaries have worked together for three generations to spread and entrench democracy, prosperity and the rule of law across Europe, and to promote our shared values around the world.

“We were enemies more than once in the last century, and today we are friends and allies. We salute those who died to give us our freedom. We will remember them.”

President Higgins travels on to Mons this evening for the official British commemoration which takes place in St Symphorien cemetery. Some two dozen Irish-born soldiers, who were among the first British army casualties of the war, are buried in the cemetery.