Gardaí warn of a 20% winter spike in burglaries 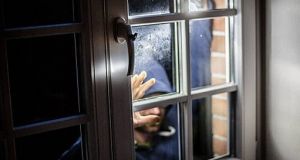 A file image of a break-in. Gardaí said the number of burglaries rises during the winter.

Gardaí have warned people to be vigilant about home security this winter as statistics show a 20 per cent increase in burglaries in the months around Christmas.

Chief Supt Barry McPolin of Cork City Garda Division told a Joint Policing Committee meeting at Cork City Hall that while the number of burglaries in Cork city had fallen by 9 per cent between January to October 2017, compared to the same period in 2018, homeowners needed to be vigilant during the winter.

Chief Supt McPolin said the number of break-ins in Cork had fallen from 476 to 434 during these periods year-on-year while the number of aggravated burglaries, where homeowners were attacked, fell from 9 to 6 over the same period.

He said criminal gangs targeting Cork homes are focusing on cash and jewellery and he urged people to keep such items in secure locations within their homes.

He said gardaí in Cork had under Operation Thor had seen some success in recent months in apprehending travelling gangs coming down to Cork and he said several criminals are due before the courts on burglary and theft charges.

Cork City Crime Prevention Officer Sgt Tony Davis said a study in the west Cork and Kerry Garda Divisions found almost one fifth of burglaries - 18.7 percent – happened between 6pm and 10pm on Friday and Saturday nights. He suggested the pattern was likely to be the same for Cork city.

He said gardaí believed a number of areas in Cork including: Ballincollig West, Carrigaline, Grange, Ballyvolane and Glanmire were being targeted by criminals and said patrols in these areas has been increased.

He also urged people to set their burglar alarms even when they are at home to deter attempted break-ins and not to leave car keys near front doors where thieves can fish them out through the letter box.