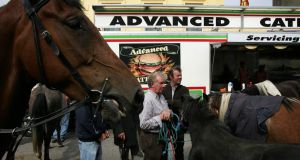 Gardaí have issued a final appeal to anyone thinking of attending one of the country’s oldest horse fairs at Cahirmee in Co Cork to think again as the event has been cancelled due to the coronavirus pandemic.

Chief Supt Tom Myers of Cork North Garda Division has expressed confidence that most people will not turn up for the fair, which usually takes place in Buttevant on July 12th or the following day if July 12th falls on a Sunday.

“We’ve put out a lot of messages and we’ve been in touch with Pavee Point because Cahirmee is very popular with members of the Travelling community and to be fair to Pavee Point, they have played a blinder getting the message out so we’re confident that very few people will turn up.

“But if there are any people out there who are still thinking of heading for Buttevant tomorrow, they really should reconsider because there will be Garda checkpoints on all approach roads and we will be advising people to turn back but hopefully people will be responsible and won’t travel.”

Chief Supt Myers said he was very confident that few people will even attempt to come to Buttevant as stallholders usually start setting up the day before the fair, but the area has been closed off with railings and so far no stall holders or vendors have come to the town.

“One of the challenges is that Cahirmee has no organising committee and people just come because they know it’s on every 12th of July but we’ve worked closely with Cork County Council and the local community in Buttevant to the message out that it’s not on this year because of coronavirus.”

Cork County Council began advising people back in May that Cahirmee would not go ahead this year with the Mayor of Co Cork, Cllr Ian Doyle from nearby Charleville, acknowledging the fair was an important part of the cultural life of north Cork but stressing it was too risky to allow it go ahead.

“This is primarily a horse fair and I think that those involved in the equine and agricultural sectors will understand the concerns surrounding the coronavirus and already have it in their minds this year’s fair will not be going ahead,” he said.

“I think when people sit down and look at this logically they will understand why the fair cannot go ahead but I do know there is concern in Buttevant and in north Cork generally that some people may ignore advice and still turn up.”

According to the Buttevant Heritage website, Cahirmee Fair is believed to have roots back in Ireland’s prehistoric past, when Mee was a High King of Munster, and his royal seat was located just to the east of Buttevant.

The fair originally took place in the townland of Cahirmee, about 5km east of Buttevant, which is considered to be in the centre of Munster and Napoleon’s famous charger, Marengo, is reputed to have been bought there.

But the fair moved into Buttevant town at the beginning of the 1920s as buyers and sellers felt threatened by the political turmoil of the time during both the War of Independence and the Civil War and has been held in the town ever since.