Gardaí to investigate dumping of ‘vanload of nappies’ in Wicklow 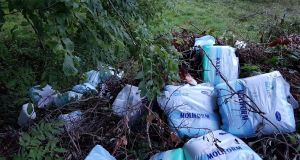 Garda and civic authorities in Co Wicklow are investigating how what has been described as a “vanload of nappies” came to be dumped in a scenic spot above Wicklow town.

The packets of unused Hartmann Moliform incontinence pads were dumped on Greenhill Road, just past a scenic car park, about one kilometre uphill from the town’s landmark courthouse.

William Winters, who lives nearby, said the packets were so numerous they could not have been transported in a family car and would have required a small van.

Mr Winters’s sister, local councillor Irene Winters, said dumping on the road was a common nuisance, but the large-scale dumping of unused incontinence pants represented a waste of resources.

Ms Winters said she understood that elderly people were entitled to a supply of incontinence pads, and when these were no longer required, people were confused about what to do with them.

But, she said, a number of nursing homes or other caring institutions have said in the past that they would take them and she expressed concern that someone may have been denied adequate usage, in order to build up such a stockpile.

“I am concerned that someone would have had to go without so that a stockpile like this would be built up,” she said.

Ian Davies of the Pure Project, which protects rural environments and uplands in Wicklow and south Co Dublin, said he had been made aware of the dumping through the Pure Project social media outlets.

Mr Davis said the dumping was disappointing, as the organisation was today judging its “Pure Mile” project, in which awards are presented to communities who have “adopted” a mile or rural roadway, clearing it of litter and cutting grass and hedges. He said any such dumping was very disappointing and Pure Project would be investigating the incident.

Wicklow gardaí also said they would investigate the dumping.