Investigators not seeking anyone else over murder suicide of three brothers 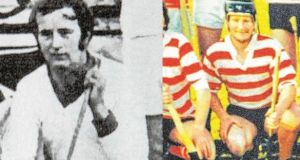 Gardaí in north Co Cork are hoping medical records may reveal whether a man who murdered his two brothers before killing himself had suffered any recent mental health issues.

Paddy (60) and Willie Hennessy (66) were found dead at the family home at Curraghgorm, 5km northwest of Mitchelstown, apparently having been attacked by their younger brother Johnny (59), whose body was later recovered from the nearby river Funcheon.

The alarm was raised at about midnight on Thursday after Paddy Hennessy’s ex-wife Stephanie and daughter Elaine became concerned when he failed to return from a visit to Curraghgorm.

They went from their home at Linden Hill in Mitchelstown to Curraghgorm, where they found Mr Hennessy with severe head injuries in a timbering yard, 200m from the single-storey farmhouse where he and his siblings grew up.

Gardaí from Mitchelstown and Fermoy arrived on the scene and, initially believing Mr Hennessy may have been shot in the head, requested the support of armed support units from Cork and Limerick.

Armed officers established a cordon around both the farmhouse and the yard in the belief they were potentially dealing with a hostage situation as there was no sign of Mr Hennessy’s brothers.

Gardaí subsequently searched the area and discovered the body of Willie Hennessy, also with severe head injuries, in a shed.

Johnny Hennessy could not be found and his red Toyota Corolla van was missing from the yard.

Gardaí issued an appeal for information about the van but cautioned members of the public against approaching the vehicle.

However, they later ruled out the possibility that Johnny Hennessy might be armed, as first suspected. There was no firearm registered to anyone linked to the farm and a preliminary examination of his brothers’ bodies revealed they had been attacked with an axe which was discarded nearby.

The Toyota Corolla was later found abandoned near St Joseph’s church in nearby Killacluig and the Garda air support unit and Garda dog unit were called in to help in the search for Johnny Hennessy .

Shortly after midday, the air support unit spotted a body floating in the river Funcheon and the Garda water unit quickly recovered the body, identified as being that of Johnny Hennessy.

His remains were brought to Cork University Hospital (CUH).

The bodies of Paddy and Willie Hennessy were also brought to CUH, where Assistant State Pathologist, Dr Margot Bolster is due to carry postmortems on all three brothers today.

Gardaí have confirmed they are not looking for anybody else in connection with the men’s deaths.

Meanwhile, Garda technical experts were last night continuing to examine crime scenes at the farm and the timbering yard, as well as the area where the van was discovered.

No note or any other evidence to suggest that Johnny Hennessy’s attack was premeditated had been found last night.

Investigators are hoping to interview GPs who treated the three brothers, as well as solicitors who handled their affairs, in a bid to shed some light on what prompted the sequence of events.

Gardaí are expected to wait until receiving Dr Bolster’s findings before formally opening a murder investigation. They will forward a file on the killings to the Director of Public Prosecutions before preparing a file for an inquest at the North Cork Coroner’s Court.

If you are affected by any issue in this article, please contact Pieta House on 1800-247247 or the Samaritans by telephoning 116123 (free), or emailing jo@samaritans.ie