Gardaí speak to partygoers at house where student fatally stabbed 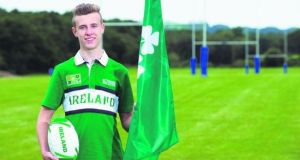 Cameron Blair (20), a native of Ballinascarthy in west Cork, was a second-year chemical engineering student at CIT. Photograph: Gerard McCarthy

Gardaí investigating the murder of a student at a house party in Cork last Thursday have identified and spoken to those who were present including a number of teenagers who gatecrashed the gathering.

Detectives have spoken to about 15 people who were at the party on the Bandon Road when Cork Institute of Technology student Cameron Blair (20) was fatally injured during a row at the door to the house at about 9.20pm.

They have also spoken to others who were in the house earlier and had left before Mr Blair was fatally injured.

It is understood that up to six teenagers initially gatecrashed the party and were inside for up to an hour before they were asked to leave. Three of these teenagers tried to get back into the house and Mr Blair was at the front door trying to calm the situation down when it is understood one of them produced a blade and lashed out, slashing Mr Blair’s neck.

Mr Blair collapsed on to the street and paramedics attended to him on the street before he was taken by ambulance to Cork University Hospital, where he later died with his parents Noel and Cathy at his bedside.

Gardaí gathered CCTV footage from the Bandon Road and Barrack Street areas and have received a good response from students who were on the street and filmed events on Bandon Road.

It is understood gardaí have identified three teenagers who ran up Bandon Road and they have spoken to them in the presence of their parents.

However, gardaí are continuing to examine CCTV footage from the area to try and get an accurate picture of what happened.

Gardaí are also continuing to search for the knife they believe was used in the attack. Search teams spent most of the weekend going through grass and parkland off Connaught Avenue looking for the weapon. Sources dismissed as incorrect some media reports that they had found a boxcutter-type knife used in the attack.

A native of Ballinascarthy in west Cork, Mr Blair was a second-year chemical engineering student at CIT and was living in student accommodation in Bishopstown. He was a keen sportsman, playing rugby with Bandon RFC and competing in athletics with Bandon AC.

Conor Slattery, director of rugby at the football club, paid tribute to Mr Blair, who he recalled as a speedy winger.

“As a rugby player, Cameron had a lovely confidence about him . He played rugby like he lived, with a great joy and exuberance and he was an exciting player to see running with the ball in hand,” said Mr Slattery

“And then as a person, he was a connector – he had this great ability to connect to people. He connected with people right across the club and that was evident in how hugely popular he was with people.

“The other thing about Cameron was that he had this great talent for innovation and adapting things and he loved working with his dad, Noel, in his light engineering business.”

1 Covid-19: One death and 363 further cases confirmed in State
2 ‘Insane’ gathering of hundreds of students in Galway condemned
3 Speed and distance of Covid-19 droplets tracked by Mater researchers
4 Irish, German and Italian contact-tracing apps to be linked in bid for ‘safer’ travel
5 Home of The O’Rahilly should not have been demolished, Taoiseach says
Real news has value SUBSCRIBE