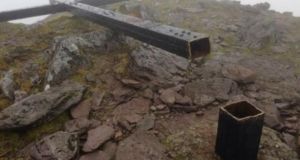 Mountain-top Christian cross was discovered felled on Saturday morning by climbers and posted on the Kerry Climbing social media website. It is suspected that the vandalism was planned and carried out by a group.

Gardaí are being dispatched to the top of Ireland’s highest mountain, Carrauntoohil, near Killarney after the mountain-top Christian cross was cut down.

The destruction of the 38-year-old summit steel cross, which stood 5m high, was discovered by climbers on Saturday morning and posted on the Kerry Climbing social media website.

The group was guiding walkers from the Royal College of Surgeons when it was told the cross had been cut down .

Sergeant Dermot O’Connell of Killarney Garda station said the force was treating the matter with the utmost seriousness.

They were appealing for witnesses, in particular “the last person who saw the cross standing” to come forward.

“We are treating this as criminal damage,” Sgt O’Connell said.

The Aircorps helicopter is expected to assist gardaí with ferrying of equipment and personnel in the examination which began this afternoon and is continuing on Monday.

Garda wish to establish when exactly the damage occurred. Although reported on Saturday morning, it may been carried out some time previously

A con saw, petrol powered like a chainsaw, is believed to have been hauled up the mountain and used to clean cut the steel around a foot from the base. It is suspected a group of people did the job.

A formal garda investigation was launched on Saturday night after a witness statement was taken.

Detectives are expected to visit the scene which is to be photographed and forensically examined.

The cross, made by workers at Liebherr Ireland in Killarney for the parish of Beaufort, was erected in 1976 with the help of 100 people.

It has become a symbol for climbers of all faiths and climbing groups are urging anyone who has seen anything suspicious to come forward to the garda.

Fine Gael Kerry TD Brendan Griffin condemned the cutting down of the cross as an act of shameless vandalism.

“The cross served as a focal point for climbers upon reaching the summit and had, in its own way, become a landmark. Regardless of what people’s views on religion are, all would agree that this is a totally senseless act that serves no purpose except needless destruction,” Mr Griffin said.

The Killarney Fianna Fáil councillor John Joe Culloty who controversially succeeded in having a crucifix erected in the new county council meeting chambers in Tralee this summer, has condemned the taking down of the cross as yet further evidence of a move towards “a Godless society”.

It is not the first time a mountain-top religious symbol has been damaged or destroyed in Kerry. Fourteen years ago a marble altar erected on the top of Mount Brandon to facilitate the annual mountain top mass was destroyed.