Discovery of ecstasy with an estimated value of €50,000 is unrelated to murder inquiry 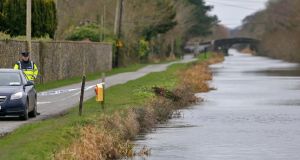 Gardaí search the area near the canal where Kenneth O’Brien’s torso was found on Saturday. Photograph: Colin Keegan, Collins Dublin

Gardaí investigating the murder of Kenneth O’Brien, whose torso was found in a canal last weekend, have ruled out any link between his killing at the discovery of ecstasy valued at €50,000.

The warehouse was searched as part of an extended examination of land and premises near the canal, as gardaí continue their murder investigation.

A Garda statement said: “It is not believed that the seizure is related to the murder investigation. No arrests have been made and investigations are continuing.”

Last night, checkpoints were set up in Ardclough in a bid to generate fresh information from the public.

Gardai believe those who dumped the torso of the 33-year-old Dublin man may have done so last Friday.

They erected the checkpoints and spoke to passing motorists in the hope of jogging the memories of people who may only pass the area on Fridays.

“People tend to follow the same routines, especially on a Friday when they might be making as journey out after work of returning home after a week away from home,” said one source. “So anyone making the same trip last Friday and who may have seen anybody acting suspiciously just might remember something of they see us at that spot.”

Meanwhile, searches of the canal for the dead man’s missing body parts continued on Friday as the widened search of properties and lands close to the area of the canal where the torso was found by two people out walking at about 3.30pm last Saturday.

An intense investigation has continued all week in which the dead man’s remains were identified after he was reported missing and gardai crosschecked DNA samples with his relatives.

Extensive searching has been carried out, including at the dead man’s home on Lealand Rd, Clondalkin, west Dublin.

The friends and family of the father of one have been spoken to in an effort to establish if Mr O’Brien was involved in any conflicts, had been threatened by anybody or had felt in any way under pressure.

The dead man, who worked as a JCB driver and mechanic, had been working in Western Australia for a number of years while his partner and young son remained in Dublin.

He had returned home last month. Last Thursday, he told his family he was “going down the country” to work for a period.

He left his home early last Friday and was never seen again. Gardaí believe he was killed, dismembered and his body parts separated and dumped almost immediately.

At was anticipated that the Garda would assess progress in the inquiry and the supply of any new information arising from Friday evening’s appeal before making a decision on the next phase of the investigation.

One possibility is that they would put on display the suitcase, or one identical to it, that the dead man’s torso was found in the hopes people with information would come forward in confidence to the inquiry team at Leixlip Garda station