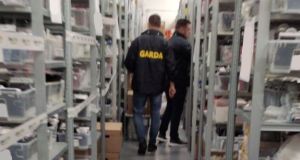 Gardaí examine some of the goods seized. Photograph: Collins

Thousands of families across Ireland may have been spared Christmas heartache after a major counterfeiting ring selling fake and almost certainly unreliable electronic goods including game console handsets and ear phones was broken up by gardaí.

A raid on a business premises in Dublin on Wednesday morning uncovered what was described as “a significant quantity” of counterfeit products, and as well as the ear phones and console handsets , USB Plugs, phone chargers and “a vast amount of branded packaging” was also seized.

Gardaí estimated that as many as 15,000 counterfeit items and 10,000 pieces of branded packaging bearing particular brand names was seized along with hard drives and mobile phones as well as documentation.

A spokesman said the haul had a potential street sale value of around €300,000.

Investigations are continuing and statements are being taken. It is anticipated that following an assessment of the property seized suspects will be arrested and additional searches are possible, gardaí said.

The Garda “Operation Bannister” was set up for the purpose of targeting criminal activity associated with the suspected sale of counterfeit electronic products of inferior quality.

The Intellectual Property (IP) Crime Unit within the Garda National Bureau of Criminal Investigation (GNBCI) took charge of the operation which also involved personnel from other bureaus within organised and serious crime, including the Garda National Immigration Bureau, the Garda Dog Unit and personnel attached to the Criminal Assets Bureau (CAB).

The unit also engaged with other relevant stakeholders including React, an organisation that brings together some 280 rights owners from across the world in the fight against the illegal trade in counterfeit goods;

It also drafted in Underwriters Laboratory (UL) - a global safety science company that test the latest products and technologies for safety before they are marketed around the world - and the Competition and Consumer Protection Commission (CCPC), which holds a dual mandate to enforce competition and consumer protection.