Gardaí seize €2,300 worth of fireworks in pre-Halloween crackdown 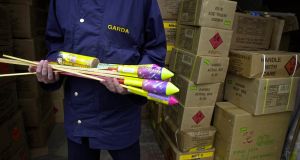 In Ireland, fireworks are classed as explosives and are resulted under national and EU legislation. File photograph: Alan Betson

Gardaí have seized illegal fireworks to the value of €2,300 as part of a pre-Halloween crackdown.

The fireworks were taken from a house in Graiguenemanagh, Co Kilkenny as part of Operation Thor which is targeting gangs who carry out organised robberies in rural Ireland.

Separately Operation Tombola has been launched to try and make the public aware of the dangers of illegal fireworks. The law was changed in 2006 to make it illegal to possess fireworks without a licence.

Fireworks are classed as explosives and are regulated under national and EU legislation.

Dublin chief fire officer Denis Keeley said his officers have encountered situations where fingers have had to be amputated as a result of fireworks.

“Even a sparkler can burn at extreme temperatures up to 900 degrees Celsius which is six times hotter than your frying pan,” he said.

“They can cause horrific injuries. This year we have already seen injuries. We have seen a considerable increase in ambulance responses last year.

“We don’t want to spoil the party, but it is really important that parents and guardians know where their children are, make sure they are supervised.”

Chief Superintendent Patrick McMenamin admitted that it is difficult to police the illegal import of fireworks. “There is a still quite a few of them to be had,” he said. “But we are pro-active in finding them.”

He said there has been approximately 11 prosecutions taken in the last few years. The illegal possession of explosives is punishable by a jail sentence of up to six months and/or a fine of €10,000.

The Minister for Justice Charlie Flanagan said there was a strong sense of cooperation between gardaí and the fire services at Halloween.

“The message should be sent loud and clear that people must act within the law. Using illegal fireworks can harm not only you, your children or your pets, but your pocket and your reputation. They are just not work the risks.”