Gardaí seize €100,000 worth of cannabis from grow house

Man in his 20s arrested during search of Co Monaghan home 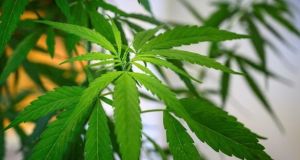 The raid took place at 9am on Saturday morning, and gardaí are conducting a further technical examination of the property. File photograph: Mladen Antonov/AFP/Getty Images

Gardaí seized cannabis herb worth an estimated €100,000 during a raid on a suspected grow house in Rockcorry, Co Monaghan, on Saturday morning.

A man in his 20s was arrested at the scene and is currently detained for questioning at Castleblayney Garda Station.

The raid was carried out by detectives from Carrickmacross and officers from the Armed Support Unit.

Gardaí found the home had been fully adapted into a grow house, and seized a large quantity of cannabis herb from the property. The seizure had an estimated street value of €100,000, pending a more detailed forensic analysis.

The raid took place at 9am on Saturday morning, and gardaí are conducting a further technical examination of the property.

The young man arrested at the scene is being held under Section 4 of the Criminal Justice Act 1984. A Garda spokesman said “investigations are ongoing” in the case.