If genuine, gardaí will look to find men involved and establish who published images 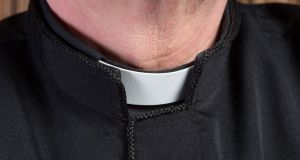 Gardaí investigating images of a man wearing clerical garb engaging in a sex act with another man on the altar of a church are hoping to establish whether the pictures are authentic or created digitally. File photograph: iStockPhoto

Gardaí investigating images of a man wearing clerical garb engaging in a sex act with another man on the altar of a church are hoping to soon establish whether the pictures are authentic or created digitally.

Officers in the North Cork Division confirmed they were made aware of the images from a church in the area earlier this month by administrators from the Diocese of Cloyne, which covers 46 parishes in east, north and mid -Cork.

“The first thing we are going to have to establish is whether or not these images are genuine or whether they may have been altered using Photoshop or some other computer programme. Garda computer experts are going to assist us with that,” a Garda source said.

A spokesman for the Diocese of Cloyne confirmed the images were received via email on May 1st and Bishop William Crean referred the matter to gardaí the next day. He declined to comment further, saying it was now the subject of a criminal investigation.

The Irish Times understands the matter was notified to the diocese by rebel cleric Bishop Pat Buckley, who has highlighted the alleged incident and commented on the images on his blog.

A Garda source said that if the images are found to be genuine, then gardaí will seek to identify the men in them, including the man wearing clerical garb. They will also seek to establish who published the images.

Both Garda and legal sources expressed caution as to whether the images, if genuine, constitute evidence of a criminal offence if it transpires the parties involved are both consenting adults over the age of 18. The issue then arises whether the church constitutes a public place.

“The Criminal Law (Sexual Offences) Act 2017 refers to sexual activity in a public place and it defines a public place as ‘any place to which the public have access whether as of right or by permission and whether subject to or free of charge’,” said a Garda source.

“The question then arises is whether a church is a public place and it may come down to the issue of when the alleged sex act took place – did it happen when the church was open to the public or was it at some time when the church may have been locked, in which case it may be legally a more grey area.”