Detectives believe Eastern European chef may have information as a witness 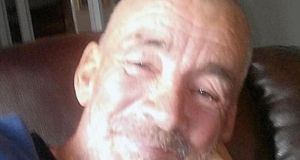 Frankie Dunne was alive on the evening of December 27th when he was seen leaving a Cork Simon facility.

Gardaí investigating the death of a homeless man in Cork have contacted Interpol to obtain a witness statement from a man who has left the country since the killing.

Investigating officers said they simply wanted to speak to the man, a chef, as they believed he had information that could assist them concerning the killing of Frankie Dunne (64).

Mr Dunne’s dismembered remains were found in the grounds of unoccupied Castlegreina House on the Boreenamanna Road around 4pm on Saturday December 28th.

Gardaí have played down media reports that the main suspect left the country via Belfast Airport to go to Scotland on Monday, December 30th.

“Yes, a person that we wished to speak to did leave the country via Northern Ireland and on to Scotland and we believe has returned to Eastern Europe but our interest in this person at this stage is as a witness,” said a Garda source.

A Garda spokesman dismissed as “completely inaccurate” media reports over the weekend that gardaí found a set of knives and saws belonging to the Eastern European chef in the grounds of Caslegreina House.

Gardaí haven’t disclosed the cause of Mr Dunne’s death for operational reasons but it’s understood that he suffered a blow to the back of the head and gardaí believe that he was already dead when dismemberment took place.

Gardaí are continuing to gather CCTV footage from all over Cork city including the northside where Mr Dunne continued to visit as they try to piece together his movements over the last 20 hours or so of his life.

Gardaí have appealed for witnesses or anyone who noticed any suspicious activity in the Boreenamanna Road area since December 27th to contact the Bridewell Garda Station on 021-4943330.