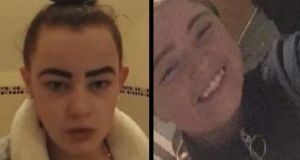 Nadine Walsh (14) (left) and Chantelle Doyle (12) were both last seen in the Naas area on the evening of Monday December 31st.

Gardaí in Co Kildare are appealing to the public for assistance in tracing the whereabouts of two girls aged 14 and 12 last seen on New Year’s Eve.

Nadine Walsh (14) and Chantelle Doyle (12) were both last seen in the Naas area on the evening of Monday December 31st and despite a number of unconfirmed sightings since then in Dublin city centre, Tallaght and Coolock they have not yet been located.

Chantelle is described as is 5ft 2” in height, of slim build with brown shoulder length hair. When last seen she was wearing a black jacket, dark jeans and white runners.

Nadine is described as 5ft 4” in height, of slim build with long black hair. When last seen she was wearing a black puffy short jacket, dark black leggings and black flat laced runners.