Gardaí search for gang who rammed an armed patrol 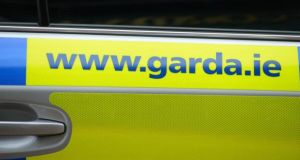 Gardaí in Cork are this Saturday morning resuming a major search operation after a three man gang failed to stop at a Garda checkpoint and rammed an armed patrol before taking to the fields.

The incident happened around 3.30pm yesterday when a high powered Saab fitted with false number plates failed to stop at a Garda checkpoint on the Old Mallow Road on the northern outskirts of the city.

Armed gardaí from the Regional Support Unit were supporting uniformed officers at the checkpoint and the Saab rammed their RSU jeep, causing airbags in the Garda vehicle to activate.

The Saab then did a u-turn and left the scene at speed before garda were able to mount a pursuit but the Saab was later found abandoned in a field near Ballinahina on the Carrignavar road.

No shots were fired and no one was injured in the incident but gardaí responded by mounting a major search operation of fields and woodland at Ballinahina but the men remain at large.

However gardaí are satisfied that they know the identities of the three men – who are all in their 20s and from the Ballinhina area – and are confident that they will be apprehended.

Earlier this year, gardaí carried out a series of searches of houses in the nearby Whites Cross and Dublin Pike areas as part of an investigation into the theft of power tools and building equipment.

Nobody was arrested in the raids which took place at the end of January but gardaí did seize a large number of power tools as well as scaffolding which they believe had been stolen from building sites.