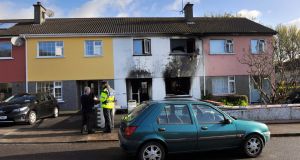 Gardaí at Macroom are satisfied foul play was not involved in the blaze which claimed the life of Kenny Relihan (26) and family friend, Noel O’Mahony (64) who was visiting the house at St Colman’s Park when the fire broke out early on Monday morning .

Mr Relihan’s mother, Noreen McAuliffe (64) is still recovering at Cork University Hospital after jumping from an upstairs window. She suffered serious smoke inhalation but is expected to make a full recovery.

Gardaí believe the fire began in the kitchen area of the two-storey terraced house. The focus of the Garda investigation is on a chip pan which may have caught fire and spread, engulfing the house in flames and thick black smoke.

It is understood postmortems by Assistant State Pathologist, Dr Margaret Bolster at Cork University Hospital on Monday afternoon have confirmed that smoke inhalation was a factor in both men’s deaths.

Mr O’Mahony, a native of Clondrohid, who is survived by his wife, Sheila and daughters, Noreen, Joanne and Paula as well his grandchildren, Ciara and Richie and great grandson, Calum, was buried on Wednesday afternoon following 2pm requiem mass at St John the Baptist Church in Carriganima.

Mourners at his funeral recalled his popularity as an entertainer in the 1990s when he performed as Leon Haymoon - an anagram of Noel O’Mahony - with his band, The Ghost Town Tumbleweeds.

Among those at the funeral was Macroom musician turned barrister, John O’Callaghan, who said Mr O’Mahony was among the most enthusiastic and energetic singers that he had performed with as a professional musician.

“I’ve played with a lot of really talented singers like Linda Martin but I can say I never played with a more entertaining and enjoyable performer than Noel O’Mahony.

“ It’s a terribly sad and tragic end for such a lovely, lively man - my sympathies are with his family and everyone who knew him.”