Baby, who has been named Maria, was found on Steelstown Road, in Rathcoole, Co Dublin 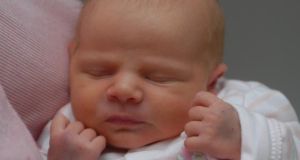 Gardaí have released a photograph of the baby found abandoned on the outskirts of Dublin on Friday, May 8th. The baby, who has been named Maria, was found on Steelstown Road, a side road near the Blackchurch Inn in Rathcoole.

Gardaí have released a photograph of the baby found abandoned on the outskirts of Dublin on Friday, May 8th.

The baby, who has been named Maria, was found on Steelstown Road, a side road near the Blackchurch Inn in Rathcoole.

The publication of the photograph had been under consideration for the last week. However, gardaí and the child and family agency Tusla initially decided against the move in the hope such a significant step might not be needed.

But due to lack of progress in the case, the photograph has this afternoon been made public via the media.

A care order has been granted to the State to effectively formalise the current status of the baby as an unidentified child in the care of the health services. She has undergone medical examinations and been cared for at the Coombe maternity hospital in Dublin, with additional care at Crumlin Children’s Hospital anticipated.

Gardaí have repeatedly said the child, who was believed to be around one-day-old when found, was well cared for in the brief period between her birth and being found

A motorist who had stopped for a toilet break at a gateway heard sounds and discovered the infant wrapped in a blanket and bin liner, inside a Marks & Spencer paper carrier bag. Forensic tests on the blanket and bag in which the child was wrapped were still under way.

The items were wet and have had to be dried at a set temperature to maintain the forensic value of anything that could be yielded from them.

Moreover, CCTV footage of vehicles driving to and from the area where the child was found is also being trawled by a team of gardaí.

The man and his partner alerted gardaí.

Gardaí have received a number of calls from the public after several appeals for the mother of the newborn baby girl to come forward.

A statement from the gardaí read: “It has been 12 days since the discovery of the baby and we wish to thank the public for their assistance. Gardaí have received a number of calls from the public and all these calls have been followed through on, but unfortunately the mother has not yet contacted gardaí or Tusla.”

Today an image of the baby is being made available to assist the appeal.

“We are releasing this photograph so mum can see her little baby girl and we would ask mum to contact us so she can come see her,” said Sgt Maeve O’Sullivan, of the Child Protection Unit in Clondalkin.

Gardaí believe the location where the child was found was a “highly unusual” spot to leave a baby.

“It’s not somewhere you’d abandon a child if you wanted someone to find it and it’s also not the kind of place you’d leave her if you didn’t want people to find her. It’s baffling,” said one officer.

The child is believed to have been born in Ireland in the 24 hours before being found.

It is suspected there was no medical care at the birth.