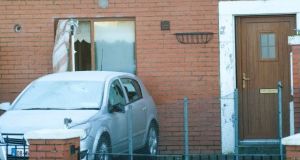 The house in the Dunard estate, Mayfield, Cork where a man was doused with petrol and set on fire. Photograph: Provision

Gardaí in Cork have said they have made good progress in their investigation into an incident where a 23-year-old man was attacked with a machete and an iron bar before being doused in petrol and set alight.

The attack happened at Dunard in Mayfield on the city’s northside just before 4am on Monday when three men burst into a house and began attacking a man named locally as Keith Greaney.

Mr Greaney was struck a number of times around the head by the gang who were armed with what gardaí believe was a machete and an iron bar before the gang doused him with petrol and set him alight.

Mr Greaney’s terrified partner Nicole O’Leary tried to quench the flames after she contacted neighbours who raised the alarm and Mr Greaney was attended to at the scene by paramedics before being rushed to Cork University Hospital.

Mr Greaney was put in an induced coma by doctors at CUH and is likely to remain in a coma for two to three days as doctors treat him for severe burns to his head and chest which doctors have said are life-changing injuries.

Mr Greaney’s three children, who are aged seven, three and two, live with their mother at another address and did not witness the attack which has shocked neighbours in the quiet estate at the top of Mayfield.

Two units of Cork City Fire Service from Ballyvolane and Anglesea Street were called to deal with a fire at the house in Dunard and the situation was quickly brought under control before the units returned to base.

The attackers fled in a black Ford Mondeo and a Citroën Berlingo van and were met by gardaí from Mayfield who pursued them along the North Ring Road but lost them on icy roads near the Fox & Hounds pub in Ballyvolane.

However, gardaí have since recovered the vehicles at a location in the southside of Cork city and garda technical experts have begun a forensic examination of both vehicles for DNA and other evidence.

Gardaí have also sealed off the scene of the attack in Dunard and garda technical experts have begun an examination of the building while officers have also begun harvesting CCTV footage from the area.

Detectives have been speaking to a number of people who witnessed the attack to see if they can identify the culprits, who don’t appeared to have been masked and may have been known to the injured party.

Gardaí have also begun harvesting CCTV footage from around Cork as they try to trace the movements of the vehicles back from the location where they were found on the southside.

Gardaí say they are keeping an open mind on a motive for the attack but said they are investigating whether it may be linked to a dispute of a personal nature between two men in their 20s.

They have appealed to anyone who saw any suspicious activity in the Dunard or Boherboy Road area of Mayfield or Ballyvolane or has any information that might assist them to contact Mayfield Garda Station on 021-4558510.