Gardaí investigating Meath death not looking for another person or vehicle 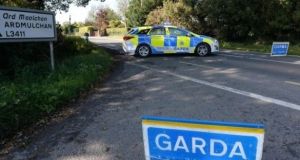 The man was travelling on an electric scooter from the direction of Slane. Photograph: Seamus Farrelly

Gardaí are not looking for another person or vehicle in relation to the discovery of a body of a man on a roadside in Co Meath on Saturday morning.

A 29-year-old Moldovan man’s remains were discovered in “unexplained circumstances” close to an electric scooter at Harmanstown on the N51 Navan to Slane Road at 2.50am on Saturday.

The man who was travelling on an electric scooter from the direction of Slane, was treated by ambulance services but was later pronounced dead, a statement by gardaí said.

A postmortem on the man has taken place but the results are not being released for “operational reasons”.

Following the postmortem, An Garda Síochána said they are not looking for any other person or any other vehicle in relation to this incident.

Members of the electric vehicle groups online said they believed it was the first fatality among drivers of electric scooters.

It is understood he was due to be married in the coming weeks and lived close to where the crash occurred.

Staff at Romayo’s Takeaway Restaurant on the Collon Road in Slane expressed their shock and devastation at the death of their popular colleague who had only moved to Ireland in the last three months.

“He was a very popular young man and was working here on Friday. He was only in the country a few months,” said a co-worker who did not wish to be named.

“We are all shocked and just devastated that he is gone. No one knows what happened.”

Gardaí in Navan continue to appeal for any witnesses or for anyone with information to come forward.

Gardaí continue to appeal for any road users who may have camera footage, including dash-cam, who were travelling on the N51 in Harmanstown between approximately 1.30am and 3am to make this footage available to gardaí.