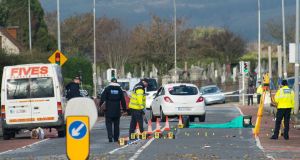 The scene of the crash in which Robert McLoughlin died after being struck by two cars in the early hours of Saturday morning in Dundalk. Photograph: Ciara Wilkinson

Gardaí in Dundalk are examining CCTV footage as part of their investigation into the death of a pedestrian who was struck by two cars on Saturday morning.

Gardaí confirmed that Robert McLoughlin (29) was crossing the road to go to his home on the old Newry road in Dundalk at the time. He had just got out of a taxi.

The incident happened at 3.15am. One of the drivers was male, the other female, and both live close to Dundalk.

The road at the scene was closed to allow gardaí from the Forensic Collision Investigation Unit to examine it on Saturday and a post mortem was also carried out.

Tributes to the deceased, who was an accountant, were led by one of his best friends, John McGahon, who is the chairman of Dundalk Municipal District.

“I have known Robert longer than I can remember. To me and our friends, Robert was always the guy to go to, always the one to talk to if you had a problem or wanted to do something; he would always be there to help you,” Mr McGahon said.

“Robert was the ‘go to’ guy, the person you could rely on.”

Mr McGahon said Mr McLoughlin commuted to Dublin from Dundalk every day and he was a keen supporter of Dundalk FC.

He said he would be sorely missed by his many friends as well as by his parents Sid and Attracta, his brother, Stephen, and his sister, Kim.