Gardaí investigating after pensioner was injured in road rage attack 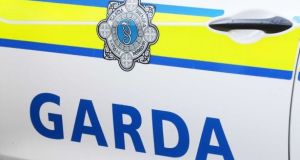 It’s understood that the man was treated for a number of non life-threatening injuries. File photograph: Niall Carson/PA Wire

Gardaí have appealed to the public for assistance in investigating a road rage incident where a motorist attacked a pensioner and knocked him to the ground in front of his terrified wife.

The violent act happened when the 75-year-old man and his wife were out walking along Old Fort Road in Ballincollig in Cork city at about 3.30pm on Thursday afternoon.

The couple were walking on the pedestrian crossing behind the Castlewest Shopping Centre when a motorist failed to stop and almost knocked them down on the crossing.

The pensioner got out his mobile phone to take a photo of the car reg when the car stopped and the driver came back and proceeded to assault the pensioner, striking him with several blows and knocking him to the ground.

The man then returned to his car and drove off leaving the pensioner lying injured on ground where he was tended to by his wife until an ambulance arrived and he was taken to Cork University Hospital.

It is understood that the man was treated for a number of non life-threatening injuries including one to his head before he was discharged and he returned home where he is understood to be making a good recovery.

Gardaí have begun harvesting CCTV footage in the area to try and see if the incident or run up to it was captured so they can identify the man’s attacker or his car which they believed was a small blue vehicle.

They believe that the car drove along Old Fort Road from the western end but then turned around near McDonald’s near the entrance to Ballincollig GAA grounds and was heading back west again when the incident happened.

They believe that there were a considerable number of people in the area at the time and they are hoping either a passing motorist captured the assault on a dash cam or a pedestrian may have filmed it on their camera phone.

“This really was a vicious and unprovoked attack on an elderly man out for a walk with his wife and we would very much like to track down the culprit whom we believe is in his 20s or 30s,” said a Garda source.

“So we are appealing to anyone who witnessed it or may have either dash cam or phone camera footage of the assault or can help us in any way to contact us at Ballincollig Garda Station on 021-4214680,” he added.