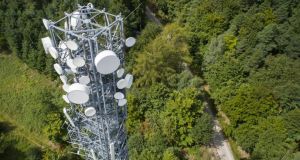 The blaze on Wednesday was extinguished by units from Cork City Fire Brigade and Garda technical experts carried out a forensic examination of the scene to establish if any accelerants were used to start the fire. Stock photograph: iStock

Gardaí are investigating an arson attack on a communications mast in Cork they believe is linked to a conspiracy theory that 5G masts are connected to coronavirus, also known as Covid-19.

A Garda source confirmed that investigators believe that the mast at Ardcullen in Hollyhill on the city’s northside was deliberately set on fire late on Wednesday night by people who thought it was a 5G mast.

Posters had appeared in the Hollyhill/Knocknaheeny in recent days denouncing 5G.

However, the source said that the mast is actually a transmission mast for 4G and 3G.

The blaze on Wednesday was extinguished by units from Cork City Fire Brigade and Garda technical experts carried out a forensic examination of the scene to establish if any accelerants were used to start the fire.

Gardaí have carried out door to door inquiries in the area and also have appealed to anyone who may have seen unusual activity to contact them.

They are particularly anxious to speak to anyone who may have been driving along Harbour View Road and may have dashcam footage to contact them at Gurranebraher Garda Station on 021-4946200.

The incidents prompted the Commission for Communications Regulation to issue a statement, saying that “there is absolutely no truth in the rumours of a link between Covid-19 and 5G.”

In its statement after the Donegal incidents, ComReg added that the Department of Health had advised that Covid-19 was spread in sneeze or cough droplets and there was no evidence of a link to 5G.

The conspiracy theory that 5G masts are somehow linked to the spread of Covid 19 began to gain momentum online in early January after stories began to link the Coronavirus outbreak in Wuhan with the installation of 5G masts.

The conspiracy alleges among other things, that Covid-19 has either been caused by the frequencies used for the new wireless technology, or that those signals impair the human immune system.

There have been over 60 attacks on masts in the UK while masts have also been set alight in the Netherlands where the arsonists have been described as hooligans engaging in a “European Championship of Mast Burnings”.

Ms Linderstal began tracking dozens of videos linking the deaths of birds and fish with 5G and found that the 35 most popular videos that appeared in January had been viewed almost 13 million times within a few weeks.

In Britain, Vodafone UK issued a statement arguing that lives were being endangered by a “dangerous lie” around 5G, after a mast near Birmingham’s NHS Nightingale Coronavirus hospital was vandalised over the Easter weekend.

The World Health Organisation has denied any link between the spread of coronavirus and 5G, while the International Commission on Non-Ionising Radiation Protection said that 5G signals posed no risk to human health.