Gardaí investigate if Maynooth student’s injuries due to fall 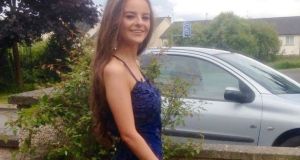 Kym Owens suffered fractures to her head and face, including her eye sockets, nose and jaw.

Gardaí investigating the case of Kym Owens are now trying to establish if the student may have suffered her injuries in a fall rather than an assault, as originally suspected.

The 18-year-old Maynooth University student remains critically ill in hospital having suffered catastrophic head injuries shortly after disembarking a bus from her native Co Monaghan on the evening of Sunday, November 20th.

She had travelled on a private bus service to Maynooth ahead of resuming her college course the following morning.

However, while walking towards her student digs she suffered a range of head injuries in unexplained circumstances on the Moyglare Abbey housing estate.

Ms Owens, a first-year student, was unconscious when found and was taken to hospital.

Almost one month from the incident, on she remains critically ill and unconscious in Connolly Hospital, Blanchardstown. She suffered injuries to the front of her head, including broken teeth, a broken nose, fractures to her eye sockets and a dislocated jaw.

Despite reports to the contrary in recent days, the Garda still has no suspects. They have no witnesses to any attack, or any possible fall.

The Garda’s efforts to conclusively establish whether any suspects were seen fleeing the area after the incident at about 8.30pm on the evening in question have been badly hampered by the heavy fog at the time.

And while the Garda inquiry has ruled out many possible suspects, including fellow passengers on the bus she had just disembarked, no evidence has emerged to point to a suspect or indeed to suggest anyone wanted to harm her.

A profile and investigation into the teenager’s personal life has failed to unearth anybody she was in dispute with. Indeed, no firm evidence of any third party involvement has emerged.

Medical examinations of Ms Owens’s injuries now suggest they could be consistent with a fall, details of which first emerged in the Irish Daily Star.

However, the Garda have stressed their criminal inquiry continues and that they are still seeking the public’s assistance in trying to piece together what had happened to Ms Owens.

They said the possibility Ms Owens had fallen was one line of inquiry but that those working on the case continued to explore other lines of inquiry in what remains a criminal case.