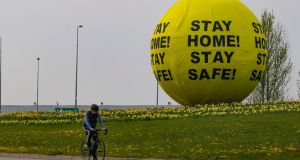 Gardaí have been inspecting caravan parks in popular holiday spots in Wicklow and Wexford, to ensure people are adhering to restrictions on non-essential travel ahead of the upcoming bank holiday weekend.

There had been significant concern that large numbers would travel from populated areas such as Dublin to holiday homes outside of the capital over the Easter weekend.

However, amid the heightened fears several caravan parks say they have seen little to no incoming visitors. Similarly local politicians have played down fears of large numbers of people travelling to holiday home locations from Dublin and elsewhere.

Gardaí have set up checkpoints across the country and along motorways and have visited several caravan parks to monitor whether the coronavirus restrictions on movement are being followed.

Ann Hall, who runs Laburnum Caravan Park in Gorey, Co Wexford, said she managed 115 mobile homes between two sites which were both empty. “We’ve two parks and we’ve not a sinner in either of them,” she said.

Ms Hall said while caravan parks in the popular holiday area seemed to be empty “there is a bit more traffic on the roads”, which she said could mean people were travelling to holiday homes.

Pip Breen, a Fianna Fáil councillor for the Gorey-Kilmuckridge area, said there had been no evidence of a deluge of people travelling into the area from Dublin. “There is very little of it, the gardaí are well on top of it,” he said.

Pat Fitzgerald, an Arklow-based county councillor, similarly said he had not seen significant numbers travelling to holiday homes or caravan parks in the Co Wicklow town.

One of the larger mobile home sites in the area, Arklow Caravan Park, has a number of residents staying in the park to cocoon due to underlying medical conditions. Of the park’s 290 mobile homes, about 40 are occupied by people who have been staying for several weeks.

Gardaí have been given new powers to instruct people to return home, if they are travelling outside of 2km of their home without a valid, essential reason, with penalties for people failing to adhere to the orders.

A Garda spokeswoman said “early next week An Garda Síochána will provide information on the number of times regulations in relation to the public health guidelines were used.”

While Garda sources on Friday reported a high level of compliance with the restrictions on movement, the PSNI said they had fined a number of people for breaching the social distancing rules in Northern Ireland.

As well as increasing patrols this weekend the PSNI has launched a dedicated website – www.psni.police.uk/covid19 – where people can report instances where social distancing is not being observed.

Assistant chief constable Alan Todd encouraged people to use the new web process “sensibly” to report when the rules are being flouted. He said that in the week to Friday, police received 906 complaints of the restrictions not being followed.

Speaking on Friday evening, and amid concerns that people might seek to travel to their holiday homes for the weekend, Mr Todd said a considerable number of people had been stopped by police patrols and instructed to return home. “The vast majority have taken advice and done the right thing and returned home,” he told BBC Radio Ulster.

Three people didn’t heed police advice, however, and were fined, he said. Fines start at £60 but will be reduced to £30 if paid within 14 days.