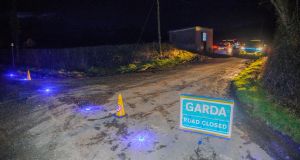 Gardaí are investigating the discovery of the woman’s body in a car in a wooded area near Doneraile in north Cork. Photograph: Daragh Mc Sweeney/Provision

Gardaí are hoping a postmortem will establish whether a woman whose badly burned body was found in a car in a forest in Co Cork was the victim of foul play.

The death of the woman, named locally as Mary O’Keeffe (72) from Dromahane, was on Thursday night being treated by investigators as “suspicious”, but sources were reluctant to be drawn on whether they were poised to begin a homicide investigation.

The alarm was raised at about 3.20pm by a passer-by walking in a Coillte-owned forest at Dromdeer outside Doneraile, who spotted a SUV in a clearing some 500m from the road.

Units of Cork county fire service attended at the scene, and brought the fire under control before discovering a badly burned body in the vehicle. Gardaí began an operation after being alerted to a man who was seen running from the woods.

Initial reports suggested that shots may have been fired, so gardaí from Fermoy requested the services of an Armed Support Unit as a precaution.

Members of the unit found the man, a 62-year-old from Ardpatrick, Co Limerick, in the Awbeg river some 3km from the scene, and pulled him from the water.

The man was taken by ambulance to Cork University Hospital (CUH) where he was treated for hypothermia and some minor burn injuries, which it is believed were sustained from the fire that destroyed the car.

Gardaí were hoping to be given permission by doctors to speak to the man on Friday as they attempt to establish the exact sequence of events that led to the woman’s death.

Officers believe Ms O’Keeffe, a mother of three who worked as a cook with a sheltered housing group in Mallow, made her own way to the woods as her car was found parked a short distance from the burned vehicle, which was registered to the Limerick man.

Assistant state pathologist Dr Margaret Bolster was due to examine the body and scene early on Friday.

Ms O’Keeffe’s body will then be removed to CUH for a postmortem, while Garda technical teams will begin a forensic examination of the SUV to establish the cause of the fire.