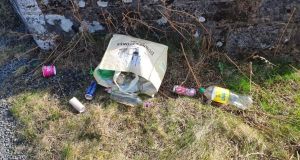 The gardaí’s account of catching the perpetrators attracted more than 3,200 reactions in the first 24 hours on Facebook, with many people adding words of congratulations to the gardaí – and condemnation for the dumpers. Photograph: Garda Siochana Wicklow/Facebook

There has been an outpouring of approval on social media after Wicklow gardaí posted an account of how they fined a driver for illegal dumping from a car in the Dublin mountains.

The Wicklow gardaí posted three photographs of a black Volvo car, a bin bag dumped on the side of the road, and a Dunnes Stores bag full of bottles and cans dumped by an old stone wall.

The Garda caption read: “ The driver of this car was observed dumping the rubbish pictured in the Sally Gap this weekend.

“Detective gardaí on an anti-crime patrol watched him and he got to take his rubbish home with him along with penalty notices for littering and [making] an unnecessary journey for him and the occupants.”

Gardaí later confirmed the littering penalty was €150, while the penalty for being outside the 5km limit was an additional €100 per person.

The number of people in the car was not disclosed.

The account of catching the perpetrators attracted more than 3,200 reactions in the first 24 hours on Facebook, with many people adding words of congratulations to the gardaí – and condemnation for the dumpers.

One of the early commentators said: “Great job lads, well done. They [the perpetrators] should have their vehicle impounded for transporting waste without a permit and [should] also [be] made pick up litter from the side of the roads.”

Another member of the public commented: “Well done. Pity ye couldn’t have taken his car as well, make him walk home. He should be fined heavily and made do loads of community work picking up litter. Pity more can’t be caught.”

Other comments ranged from the delight at the post to suggestions for future penalties, which included community service, jail time or enforced litter cleansing operations working for the Pure Project in the Dublin and Wicklow Mountains.

The Pure Project (protecting uplands and rural environments) was established to combat fly-tipping and illegal dumping in the Wicklow and Dublin mountains. Since its establishment, the project – comprised of a lo-call phone line (1850 365 121) and an office – have processed more then 12,000 reports of illegal dumping resulting in more than 12,000 collections and the removal of about 3,500 tonnes of rubbish from the landscape.

The figure excludes the tonnage removed by local authorities in south Dublin and Wicklow.

Pure has appealed to those visiting or camping in the uplands to take all their litter home with them after last summer’s “wild camping” resulted in fires and heavy littering.