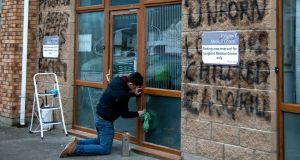 Gardaí have begun examining CCTV footage at a Longford medical practice, which was vandalised with anti-abortion graffiti in the early hours of Monday.

The facade of the premises was covered in graffiti featuring inflammatory slogans, including referring to the “murder” of “unborn Longford children”.

The Longford Medical Centre is run by Dr Syed Ali, who has been in the practice for many years. Staff at the premises declined to comment. Dr Ali is believed to be out of the country and efforts to contact him were unsuccessful.

It is not known who or what may have prompted the incident, with those behind the graffiti appearing to take aim at the media and the Government’s policy on abortion.

Dr Ali had previously said he was against the terminations of healthy babies. Following the referendum on the Eighth Amendment last year, the GP was quoted in the Longford Leader as saying he would be in favour of abortion only in certain circumstances.

“In cases of Down syndrome and any woman who has a deformed baby, then yes, I will agree as there is a risk to the mother and the baby,” he said.

“But if someone comes in and the baby is healthy, I will not advise for an abortion.”

In online posts on Monday Dr Ali’s daughter Sarina wrote about her father’s views : “On behalf of my father, he is strictly against abortion,” she said.

“He would never recommend abortion to any women as it even goes against his religious views.

“People should have their facts and English right before going to vandalise property,” she said.

Gardaí are trying to identify those responsible for the graffiti. “Everyone is entitled to protest and everyone has a right to express their opinion but we would discourage that type of protest and we believe this type of protest is not reflective of the feeling in Longford,” said Supt Jim Delaney.

“This is not the norm and we wouldn’t like to think this is the norm for Longford,” he said.

Local Fine Gael councillor John Browne, who runs an accountancy and constituency office above the premises, said the incident could not be condoned. “[This is] terrible stuff aimed at a doctor,” he said. “Why should he be singled out, or anyone singled out for that matter?”

Fianna Fáil councillor Joe Flaherty said the fact “that something like that would happen in the dead of night under cover of darkness” was disappointing.

“I don’t think it reflects people’s views; we have had a referendum,” he said adding that it was now important such services were provided.