Gardaí defend response to discovery of body of homeless man 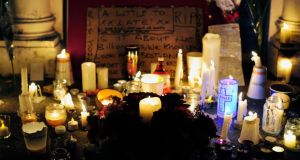 Gardaí have insisted they arrived on the scene of the discovery of the body of a homeless man just metres from Leinster House within five minutes of being alerted.

The body of Jonathan Corrie (43) was found on Monday in the doorway of a building on Molesworth Street, directly opposite Leinster House.

Mr Corrie, who was originally from Co Kilkenny, was found by Sophie Pigot from Enniskerry, Co Wicklow.

Ms Pigot described on her Facebook page how she spotted the deceased man on her way to work and attempted to get a garda on duty at the gates of Leinster House to come to his aid.

She asked that people “maybe volunteer or give support to homeless charities this Christmas”.

The Garda press office said gardaí were alerted to the incident at 8.05am and “the member on duty at the Dáil immediately contacted Pearse Street Garda station and a car was dispatched immediately and arrived at the scene five minutes later”.

The Garda press office said it was “ not in a position to discuss this case further as a file is being prepared for the Coroner’s Court”.