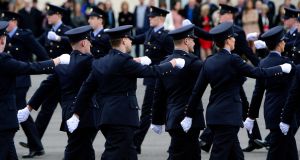 Under legislation that came into force on Saturday Garda members, through their representative bodies, can go to the Workplace Relations Commission and the Labour Court for the first time.

The Department of Justice said that new internal dispute resolution mechanisms had been introduced in An Garda Síochána and specialist staff had been appointed.

“Management of industrial relations in An Garda Síochána now comes under the direct remit of the Garda Commissioner,” Minister for Justice Charlie Flanagan said. “This is in keeping with the vision of the Commissioner as the ‘true CEO’ of An Garda Síochána, as set out in the report of the Commission on the Future of Policing in Ireland and contained within its implementation plan, ‘A Policing Service for the Future’.”

Mr Flanagan said he was “confident” the new approach would be a positive change for all stakeholders.

1 Cardiologist saved by paramedics after heart attack at Dublin Airport
2 Two Irish passengers on cruise ship test positive for coronavirus
3 Q&A: How long could it take to form a new government after Election 2020? Could things get messy?
4 Body part found on Donegal beach by person out walking
5 Approval granted for more than 650 apartments beside St Anne’s Park in Dublin
Real news has value SUBSCRIBE