Taoiseach Leo Varadkar TD has offered an apology on behalf of the State to the woman at the centre of the Kerry babies case, Joanne Hayes, while speaking at the European Parliament in Strasbourg. Video: EU Parliment TV 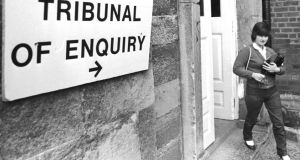 Joanne Hayes in 1985. Ms Hayes was charged with murder on May 1st, 1984, but the charge was dropped. Photograph: Matt Kavanagh

Gardaí investigating the killing of Baby John, found washed up on a beach in Kerry more than 30 years ago, believe the fact the infant lived for three days means that a number of people will have known about his death.

Local detectives in Kerry, supported by the serious crime review team (SCRT), have begun an investigation into the death of the infant, found with 28 stab wounds and a broken neck on White Strand near Cahersiveen on April 14th, 1984.

Headed by Det Insp John Brennan from Tralee and supported by SCRT detectives led by Chief Supt Walter O’Sullivan from Dublin, the team is very hopeful of progress .

“We are operating on the premise that because the baby lived for three days before he was killed, that increases the likelihood that more people were aware of his birth than would be the case than if he had been killed immediately after birth, so there may be more people out there with information,” said one source.

Urging “what may be a very small group of people” to come forward after 30 years, detectives believe the passage of years may mean some people now “feel able” to assist.

There has been speculation as to why gardaí have opted to reopen the case some 34 years after the infant’s death, besides the advances that have been made in DNA testing over the decades.

Chief Supt Tom Myers carried out a review of outstanding unsolved cases in the county after he was appointed to his post, requesting help from the so-called cold case team in Dublin.

The new investigation will concentrate on Cahersiveen and local links to the death of Baby John, who is buried in a cemetery on the Waterville Road in the town.

“The original investigation in Cahersiveen lasted only three days. Once gardaí learned that Joanne Hayes had given birth to a baby in Abbeydorney, the whole focus shifted to Abbeydorney and north Kerry,” said a source.

So far, gardaí have not found any match between Baby John and material in the Garda DNA database set up in November 2015, but the database is described as being in its infancy. Only those arrested for serious offences are obliged to give samples.

Gardaí plan to ask people in the Cahersiveen and Iveragh Peninsula to voluntarily give samples in an attempt to get a full or partial match with Baby John in the hope of ultimately identifying his parents.

“The beauty of DNA is that it might give us a partial match to a relative of one of the parents – say a brother or a sister which would point us in a certain direction and, of course, it is also a vital tool in helping to eliminate someone from our inquiries as well, so it can be useful,” said one Garda source.

Ms Hayes was charged with murder on May 1st, 1984, but the charge was dropped. A tribunal of inquiry was set up to examine the Garda investigation, ultimately leading to the dissolution of the murder squad.