Firefighters and hundreds of local people and volunteers battled a large gorse fire in west Donegal over the weekend. Video: Jimmy Stafford 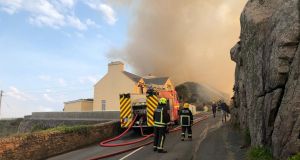 Firefighters work to control a gorse fire that put a number of homes at risk on Monday in Kincasslagh, Co Donegal. Photograph: Canice McGarry/PA Wire

Gardaí have issued an appeal for witnesses amid local speculation that Monday’s wildfires in Co Donegal may have been started deliberately.

Hundreds of acres of land around the villages of Loughanure and Annagry were destroyed following the blaze, which started at 6am.

Up to 15 units of the Donegal Fire Service, supported by the Civil Defence, the Air Corps, soldiers and hundreds of locals fought the fires for hours.

The fires, which destroyed one holiday home and damaged vehicles, were brought under control late on Monday evening.

However, there are now local reports that at least one of the fires, a blaze in the Belcruit area, may have been started deliberately.

Although gardaí say they have no evidence so far to suggest the fires were started deliberately, they have appealed for witnesses if anybody noticed anybody acting suspiciously early on Monday morning in the area.

As part of their investigation, gardaí are carrying out house-to-house enquiries in the Loughanure area on Tuesday.

“Gardaí have launched an investigation which is routine in the circumstances. We are conducting house-to-house enquiries and are appealing to anybody who may have any information which may help us with our investigation to contact us at Milford Garda station,” he said.

He said while local volunteers had done good work, he asked those trying to view the fires not to choke up road corridors for emergency vehicles.

There had been criticism locally about the delay in deploying the Air Corps to the scene after it took seven hours for the air relief to begin dropping water over the affected areas around 5pm.

Local TD Pat “the Cope” Gallagher called on the Minister for Defence Paul Kehoe’s department to provide a full report on the delay on mobilising the Air Corps.

The Air Corps defended its response time, saying it is not a primary fire fighting agency.

Capt Kevin Fitzgerald said the crew who fought the fires had to be assembled from “the four corners of the country”.

“When we got the task we had to mobilise a crew. We don’t have the resources for fire fighting. Crews had to come from all over the country,” said Capt Fitzgerald.

Because the Air Corps is not a dedicated fire service it takes time to respond, while it can respond to medical emergencies within 10 minutes, he told RTÉ’s Morning Ireland.

The wildfires have been quelled, according Donegal County Council, although some “hot spots” do remain and are being monitored. And it warned that there is still a risk of other fires breaking out.

“The notice of high fire risk (Condition Orange) remains effective up until Wednesday of this week for all areas where hazardous fuels such as gorse, heather, dried grasses and other dead vegetation exist,” said the spokesperson.