Gardaí appeal to public for information on missing Laois teenager 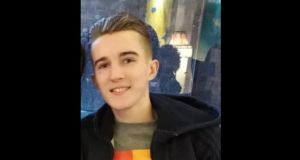 It is now believed Gearóid Morrissey may be in the Limerick area. Photograph: Garda press office

Gardaí are appealing to the public for their help in tracing the whereabouts of a 16-year-old boy last seen in Co Laois in early September.

Gearóid Morrissey has not been seen since he was last spotted in Mountmellick on September 5th.

It is believed he may now be in the Limerick area. It is not known what he was wearing when he was last seen.

Gearóid is described as 170cm (5ft 7in) in height with a slim build, brown hair and brown eyes.

More than 30 people queue overnight to secure property in Carlow 17:00
Gardaí appeal for information on rape of teenager in Co Mayo playground 16:56
Covid test in use at Rome, Frankfurt, Dusseldorf airports being piloted in Roscommon 15:34
Traffic volumes show Donegal locking down to greater extent than Dublin 15:17
Coronavirus: Donnelly ‘cautiously optimistic’ about Dublin 14:42

1 Coronavirus: Donnelly ‘cautiously optimistic’ about Dublin
2 More than 30 people queue overnight to secure property in Carlow
3 Man with electric scooter who died in Meath was due to get married in the coming weeks
4 ‘Entirely wrong’ to remove pandemic payment from students, says Sinn Féin leader
5 Traffic volumes show Donegal locking down to greater extent than Dublin
Real news has value SUBSCRIBE