Gary Dineen (35), from city’s northside had availed of homeless services 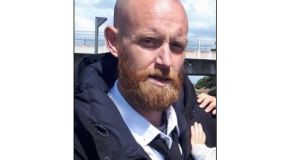 Gary Dineen (35) was originally from St Luke’s on Cork’s northside but had been availing of homeless services recently.

Gardaí have appealed to the public for assistance in their investigation into an unexplained death in Cork.

The appeal follows the discovery of a body near the entrance to a car park in Cork city centre on Wednesday.

Gardaí have named the dead man as Gary Dineen (35), who was originally from St Luke’s on Cork’s northside but had been availing of homeless services in the city in recent months.

Mr Dineen’s body was discovered on Merchant Street, a cul de sac adjacent to the entrance to the Merchant Quay multistorey car park opposite Parnell Place Bus Station in the city.

The alarm was raised around 11.30am on Wednesday and Garda technical experts carried out an examination of the scene before gardaí requested the services of the State Pathologist’s Office.

It’s understood Mr Dineen had suffered an injury to his head and Assistant State Pathologist, Dr Margaret Bolster examined his body at the scene before it was removed to Cork University Hospital.

Dr Bolster carried out a postmortem on Mr Dineen’s remains at CUH but it is understood the findings are not conclusive as to how Mr Dineen suffered the head injury.

Gardaí believe he may have been in the cul-de sac for several days prior to his body being found and they have begun inquiries to try to establish when he was last seen alive.

Gardaí have begun interviewing other homeless people in Cork to see when they last saw Mr Dineen alive. They have also begun examining CCTV footage from the area.

They issued a statement on Thursday night saying they were keeping an open mind as they continue to investigate.

They have appealed to anyone who was in Mr Dineen’s company at any time from Saturday August 8th to contact them at the Bridewell Garda station at 021-4943330.

They also appealed to anyone who saw anything unusual in the Merchant Quay Car Park and its environs on Parnell Place from Saturday, August 8th to Wednesday, August 12th to contact them.