Former solicitors who created false identities in €400,000 fraud are jailed 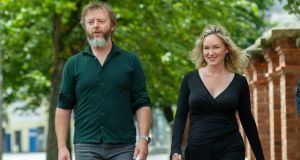 Two former solicitors have been jailed after they admitted a series of fraud offences where they created false identities, donned disguises and paid homeless people for their PPS numbers to steal almost €400,000 from banks and credit unions.

Keith Flynn (46) was jailed for four years and his wife, Lyndsey Clarke (37), was jailed for two years after they pleaded guilty to conspiracy to commit fraud, arising out of a Garda investigation into the theft of funds from banks and credit unions between January 2016 and June 2018.

The couple, who got to know each other when Ms Clarke went to work for Mr Flynn at his legal practice eight years ago, took out a number of loans in financial institutions using fake identities. The three banks and 12 credit unions are at a loss of €394,804 following their criminal activity.

Det Garda McCarthy of the Economic Crime Investigation Unit said the couple applied for loans using fake driving licences obtained online, fake bank statements and fake payslips. They even paid homeless people for their PPS numbers in order to use them.

They also used fake Virgin Media, Airtricity and Electric Ireland bills which they provided to the banks and credit unions that they defrauded while they also provided details to An Post, Permanent TSB and KBC to create fake accounts but no loans were approved on those accounts.

Det Garda McCarthy said that in September 2017 the Financial Crime Unit in Bank of Ireland became suspicious of activities in six accounts and contacted gardaí who began an investigation. In July 2018 a search was carried out at an apartment in Sunday’s Well in Cork where the pair were living.

Flynn and Clarke were not present for the search when gardaí recovered laptops, wigs used for disguises when they went to banks and ATMs, and they also found 21 fake Irish driving licences, 19 fake bank cards and 16 Credit Union books in a locked safe after the couple handed over its key.

Defence counsel for Flynn, Shay Roche SC, and defence counsel for Clarke, Alice Fawsitt SC, both pleaded for leniency, pointing out that neither defendant had any previous convictions and both had co-operated fully with gardaí when they were questioned about the offences.

On Monday, Judge Sean Ó Donnabháin said it was a very significant case given a high level of organisation and sophistication involving the creation of false identities and the creation of a formidable array of supporting paperwork which enabled them to open fake accounts in the various institutions.

He said the case was different from the type of fraud cases which often come before the court involving a breach of trust by an employee of a financial institution but there was a level of determined criminality attaching to the offences which went on for 18 months.

These were all aggravating factors but he acknowledged it was a complex and elaborate fraud and the fact that both accused had co-operated with gardaí and pleaded guilty at an early stage were significant mitigating factors which had to be factored into his sentence, he said.

He sentenced Flynn to four years backdated to October 31st last when he first went into custody while he sentenced Clarke to two years in jail, explaining the difference in sentencing being due to Clarke’s personal circumstances.

Judge Ó Donnabháin ordered that €100,687 recovered from the couple should be returned, with some €27,671 to be paid to Bank of Ireland whose vigilance unearthed the crime and led to the couple being caught. The remainder of the money is to be distributed to the other banks and credit unions.

Both Flynn and Clarke, who practised with Keith Flynn & Company, were struck off the roll of solicitors in 2018 following findings of professional misconduct. Clarke is a former Fine Gael candidate who got just over 239  votes when she ran in the 2014 Cork City Council local elections.