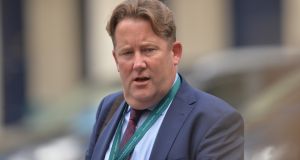 Minister for Housing Darragh O’Brien said he had ‘concerns that the scale of the developments is moving away from the niche quantity of units the concept originally aimed for’. Photograph: Alan Betson

Eoghan Murphy, the former minister for housing who introduced co-living guidelines two years ago, has said his successor was “right to act” when he announced a de facto ban on future developments.

On Monday, Minister for Housing Darragh O’Brien said that he intended to restrict all future commercial co-living development in the State.

He said he will introduce updated guidance which makes a presumption of refusal against planning applications for co-living developments (which involve the rent of individual bedspaces connected to shared cooking, dining and other facilities).

Mr Murphy, who was heavily criticised by the opposition for introducing guidelines to support the concept in 2018, said on Monday that co-living was “only ever intended to play a limited and niche role in the housing market. It was never intended as an alternative to conventional apartment or housing developments.”

The Dublin Bay South TD supported his Government colleague’s decision, saying: “Minister O’Brien is of the view there are enough developments in the system to meet anticipated demand and so he is right to act.”

In an email to officials outlining his rationale for the decision, Mr O’Brien cited the number of permissions and applications that have been lodged so far for co-living. He wrote: “Given the unprecedented nature of these developments I have concerns that the scale of the developments is moving away from the niche quantity of units the concept originally aimed for to a significantly larger role in the housing system.”

He said the number of projects in the pipeline is similar to the limit imposed in the Greater Manchester area, on a pro-rata basis, and that “there is sufficient amount to prove out this concept without potentially unbalancing the housing system”.

There was a broad welcome for the reforms from the Opposition. Labour Party spokeswoman on housing Rebecca Moynihan said co-living is “not a solution” for housing shortages and is “even more unsuitable in the context of the Covid crisis”. She called for new guidelines on other forms of rental housing, such as purpose-built student accommodation. She warned that some developments could still be granted permission “despite scathing planners’ reports from Dublin City Council” which had criticised inadequate bedroom and community facilities.

Eoin Ó Broin, the Sinn Féin spokesman on housing, sounded a note of caution. While he said he would welcome an outright ban on co-living, he urged Mr O’Brien to clarify whether he intends to ban or “just restrict” co-living. The Minister later said on Twitter it was a ban, but the Sinn Féin deputy said “we need to see the new regulations as a matter of urgency and know when it will be introduced”.

Cian O’Callaghan, the Social Democrats housing spokesman, said the ban “is long overdue. The Government must now draw a line in the sand under these shoddy housing policies.

“At the heart of the co-living plan was a desire to drive down standards,” he said.

“The Government must now fully commit to providing people with decent housing – this includes having enough personal space, good ventilation and access to a garden or balcony of your own. It is not too much to ask for and I’m glad the Minister has started to recognise that.”