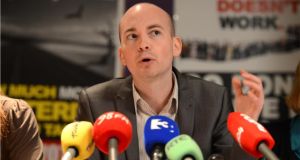 Former Socialist Party MEP and Dublin South-West byelection candidate Paul Murphy has accused Sinn Féin of an “incredibly dirty trick” over a Facebook posting which he claims was written under his name but did not come from him. Photographer: Dara Mac Dónaill/The Irish Times.

Dublin South West byelection candidate Paul Murphy has accused Sinn Féin of being behind a “dirty tricks” campaign over a “fake” Facebook posting which was shared by some members of the party.

Mr Murphy said he was now “fairly sure that a Sinn Féin member or close supporter in Dublin South West shared a picture purporting to be a conversation between me and him”.

Mr Murphy claims the post was written using a fake account in his name. It suggested the Anti-Austerity Alliance (AAA) candidate was being dishonest to the electorate about the issue of water charges, and was shared on the Facebook pages of many Sinn Féin politicians including deputy leader Mary Lou McDonald, who apologised to Mr Murphy last night, and MEP Lynn Boylan.

The fake profile and posting have both been deleted from the internet.

Mr Murphy said it was evidence of Sinn Féin’s panic over the issue of water charges. He acknowledged that the party was in favour of abolition of water charges if it is in Government after the next election, but he accused it of being soft on the issue of a boycott of the charge.

Ms McDonald denied the party had anything to do with the fake Facebook posting. “It was a mistake pure and simple,” she told the Week in Politics programme. She also reiterated her apology to Mr Murphy.

The Facebook posting involved a conversation between Sinn Féin supporter Jason Roe and someone calling themselves Paul Murphy, using the same name and photograph as the ex-MEP.

In response to a question from Mr Roe, Paul Murphy responded: “Why am I scared of Sinn Féin? It’s politics Jason. I know Sinn Féin may block water charges if they get elected but I’m not a member of Sinn Féin so politics kicks in and I say what I have to in order to gain support!

“To be honest I know I probably won’t get elected but I have to give it a good shot ... you understand that yes.”

Sinn Féin Dublin South West candidate Cathal King, who is favourite for the seat on Friday, said there was “no evidence” that anybody in the party was behind it, and, if one of them was, they should be expelled from the party.

Ms McDonald apologised last night for posting the screenshot. On her own Facebook page, she wrote: “There was a screen shot of a conversation purporting to be from Paul Murphy (the Socialist Party candidate in the Dublin South West by-election) circulating on Facebook earlier this morning. I shared this picture and I accept that the contents of this image were untrue. I am happy to apologise to Paul Murphy for any offence or distress this may have caused.”

Mr Murphy requested through his official Facebook account that Mr Roe send him the original posting. Mr Roe admitted to having screengrabbed the original and he then deleted it.

He apologised, saying he had jumped too quickly to circulate it to Sinn Féin members.

Mr Roe explained: “I had posted comments on your page a while back and tho (sic) they were criticising you, I respected you for leaving them up. I should have known better than to jump and post it without checking its authenticity and I deleted it.”

He questioned Sinn Féin’s approach to the election and added: “It seems as if the new Sinn Féin standard approach in elections is to share and spread bogus accounts and bogus accusations.

“Sinn Féin claim the bogus account was not created by a party member but the false accusations aiming to smear an election rival is extremely concerning.”