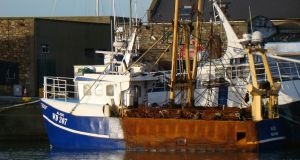 The Wexford based Alize that sank off Hook Head. Photograph: Tony Muldoon.

The 65-year-old fisherman who died after a boat sank near Hook Head off the coast of Co Wexford early on Sunday morning has been named locally.

He was Joe Sinnott from Kilmore Quay.

A major search operation in taking place for the second man (41) who was on board the boat. The man, from Fethard-on-Sea, was the skipper of the boat, and related to the owners of the vessel.

The deceased man was taken to University Hospital Waterford, where paramedics worked to revive him, but he failed to regain consciousness and was pronounced dead some time later.

The emergency services were alerted at 12.15am this Sunday morning when the EPIRB (Emergency Position Indicating Radio Beacon) from the Wexford fishing vessel, Alize was activated.

The Alize, which is owned by a family from South Wexford and is registered as operating out of Duncannon, had been out fishing for scallops for 36 hours and was due to return at 11pm on Saturday night but failed to do so.

The Alize is a 11.7 metre steel-hulled vessel built in the UK and is believed to be more than 20 years old.

The Irish Coastguard Sikorski helicopter, Rescue 117, was tasked to assist while RNLI Lifeboats from Kilmore Quay in Co Wexford and Dunmore East in Co Waterford were also launched to assist in the operation.

Rescue 117 located an unresponsive man in the water four nautical miles off Duncannon and airlifted him to Waterford Airport from where he was rushed by ambulance to University Hospital Waterford in Ardkeen.

The search for the second man involving the RNLI life boats from Kilmore Quay and Dunmore East as well as the RNLI inshore boat from Fethard on Sea continued through the night assisted by local fishing boats from both ports.

And the Irish Coastguard Sikorski helicopter from Dublin, Rescue 116 joined in the search at first light on Sunday which is being co-ordinated by the Naval Service’s LE Ciara which is now on scene.

Weather conditions on Saturday night were said to be reasonable with Force 4 winds while on Sunday morning winds have risen to Force 5 with two metre swells but it is forecast to worsen to Force 7 later and to hit gale Force 8 on Monday.

It is understood the search area is not far from the scene of the sinking of the Dunmore East trawler, Pere Charles which went down with the loss of all five crew while returning home from a fishing trip for herring in January 2007.