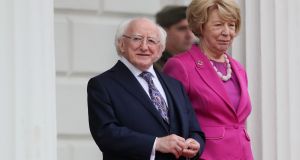 President Michael D Higgins and his wife, Sabina, await the arrival of the Italian president, at Áras an Uachtaráin earlier this month. Photograph: Brian Lawless/PA Wire

Fine Gael and Fianna Fáil figures who have been linked with a run for the presidency say they will not mount a challenge if Michael D Higgins seeks a second term.

The Irish Times reported yesterday that Mr Higgins will seek a second term of office, with figures in Leinster House told he will declare his intentions in July.

It is expected the President will be asked about his intentions today during a trip to Greece. It is not anticipated, however, that he will make any definitive comment.

Senior figures in both Fianna Fáil and Fine Gael have said they would prefer to support Mr Higgins than contest an election later this year. Sinn Féin leader Mary Lou McDonald previously said she believes an election should take place.

Mr Kelly also said Mr Higgins should not be restricted by his statement during the presidential election in 2011 that he would only be a one-term president.

“If he wants to continue, I would not be interested,” Mr Kelly said. “He has performed exceptionally well and if he feels up to the challenge, I don’t think he should be encumbered by the fact that he indicated at that time he would do seven years.”

However, Mr Kelly added of Mr Higgins: “But, if he isn’t [standing], that’s a different story.”

His views were echoed elsewhere in Fine Gael. TD Noel Rock said: “Fine Gael would do well to be seen to above party politics and should endorse Michael D Higgins”.

Mr Ó Cuív has been linked with a possible run for the presidency, although he would neither confirm or deny having a firm interest.

The Galway West TD said, however, that he would not stand against Mr Higgins, a former TD from his constituency. “If he is running, I won’t run against my own constituency colleague.”

Officially, a Fianna Fáil spokesman said its “parliamentary party will discuss the issue and take a view in due course”.

A Labour spokesman said Brendan Howlin had made clear that Mr Higgins, who was elected as a Labour candidate, will have the party’s support if he chooses to stand again. Government sources said they had no received indications yet regarding Mr Higgins’s intentions.

Meanwhile, Independent senator Gerard Craughwell said he was pursuing the required 20 signatures from TDs or Senators to secure a presidential election nomination. Mr Craughwell said Mr Higgins had done an excellent job, but had stated he would only serve one term.

O’Doherty and Waters ordered to pay legal costs of case against State over Covid-19 laws 11:48
Tánaiste rules out including ban on Israeli goods in programme for governemnt 11:47
Simon Harris tests negative for Covid-19 after waiting three days for result 08:45
Search continues in Drogheda for young boy believed to have fallen into River Boyne 08:39
Coronavirus: Ireland has higher per capita death ratio than US, study finds 07:54